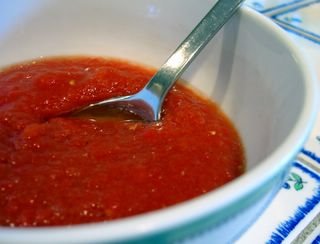 When Alanna and Kalyn told me that they were going to make gazpacho today, I couldn’t resist joining in with my blogging buddies. As far as I’m concerned, gazpacho is one of the best soups that you can have during the summer. Not only is it easy to make, since it requires no cooking, but it uses up lots of fresh vegetables at the peak of their season. I don’t know about you, but I feel pretty good about a satisfying dish that is comprised entirely of tasty, healthy vegetables.

I have made many gazpacho recipes and tend to vary the ingredients according to the vegetable quantities that I either already have, using more peppers or more cucumber, or according to what I want to use up. The dish is very much a “toss everything in” sort of thing. But if I am going to stick to a recipe, I think that Elise’s version is one of the best. It’s a little bit spicy, a little bit sweet and very satisfying on a warm day.

I admit that, even though the recipe is lovely as-is, I do make a few very minor changes because I can’t fight my anti-recipe gazpacho instincts. For example, I am too lazy to peel the tomatoes. I use them whole. I also use cilantro insted of the chives called for in the original. And sometimes, I use balsamic vinegar instead of red wine vinegar.

Now that confession time is over – and I think that Elise will forgive my occasional alterations – what are you waiting for? Make some gazpacho!

Combine the vegetables, tomatoes through garlic, in the food processor and pulse to chop. Add all remaining ingredients and blend to desired consistency (either smooth or slightly chunky). Place in a non-reactive storage container, cover tightly and refrigerate for several hours (overnight is best), allowing flavors to blend and the soup to chill.Serves 8.

*Note: I always reduce the amount of oil when I make this, if I use it at all. The oil adds a smoothness to the soup, but I rather like a slightly more “rustic” texture. If I add it, I just drizzle a bit in. I estimate that the amount is 1 tbsp, or 2 at the most.