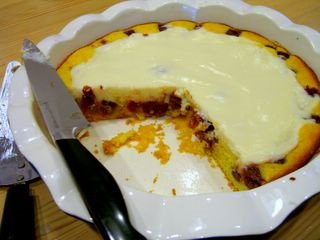 I watched a special on the Food Network a few weeks ago that was about a pie competition. At the competition, there were a number of categories for amateur bakers: apple pie, fruit pie, cream pie, etc. Just about every pie looked delicious, but the one that ended up winning the best in show award was a fluffy pie that used Cool Whip as one of its main filling ingredients. My first thought, which I am sure was shared by others, was one of wonder – how could that have been picked over the perfectly made from-scratch pies? The answer is simple: it tasted better.

My point here is that food snobbery, however you choose to define it, is prevalent in the food-loving community and everyone has it to some small degree. When it leads to using only organic ingredients and from-scratch pies and cakes fresh from the oven, it can be a good thing. But it does not mean that the dishes that don’t live up to those standards are sub-par, or unworthy of notice. I’m not going to say that they will always be as good as something that is entirely homemade – I do bake my own bread, after all – but it certainly can be delicious.

Case in point is this award winning recipe for Peaches and Cream Pie, which has apparently won the recipe writer 5 blue ribbons and a “Best in Show” award, not to mention a five star rating from more than 450 reviewers on AllRecipes. With that kind of pedigree, I knew that I had to try the pie as soon as I had seen it. It is not a traditional pie, though. It has a cake base, rather than a pastry one, and uses pudding mix in the batter. It also called for canned peaches.

I’m glad that I put aside any snobbery I might have felt and made it. I used cherries instead of peaches, but the pie was declared to be one of the best things my tasters have ever tasted.

And they have tasted a lot.

The reason that the recipe calls for canned peaches is twofold: they take less time to soften in the oven and are very consistent. Everyone has jarred or canned peaches, so the pie can be made at a moment’s notice. I used jarred Morello cherries (not cherry pie filling, but cherries in juice) from Trader Joe’s. Other berries, fresh or frozen and defrosted, would work here, too. The vanilla pudding added a ton of vanilla flavor to the base of the “pie” and made a wonderful match for the cream cheese topping. In fact, it was almost like a very unusual cheesecake, or a cake with a cheesecake frosting. It was moist, surprisingly light and very good.

I’m not saying that all recipes that aren’t entirely homemade, etc. will be fantastic, but sometimes it is worth trying them just to find out. You might be surprised. 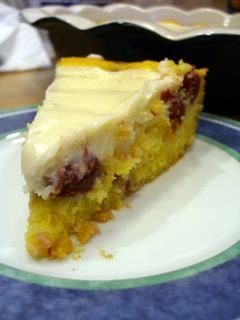 Preheat oven to 350F. Grease a 10 inch deep-dish pie pan or round baking dish.
In a large bowl, stir together flour, salt, baking powder and pudding mix. Using an electric mixer, beat in butter and egg, adding milk gradually, until mixture is smooth. Pour into pie pan.
Arrange fruit on top of cake mixture.
In a small bowl, beat cream cheese until smooth, then add sugar and 3 tbsp milk and beat until sugar is dissolved and mixture is fluffy, about 2 minutes. Spoon cream cheese mix over fruit, gently spreading it to within 1 inch of pan edge.
Bake at 350F for 30-35 minutes, until golden brown at the edge.
Cool on a wire rack
Serve slightly warm or chilled.
Serves 10.

Note: If using frozen cherries, let them defrost before using. The same thing goes for other frozen berries. You will probably need about 1 1/2 cups fruit. Otherwise, use canned peaches, as in the original recipe.