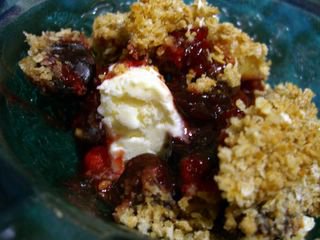 I really like crumbles because they can be mixed up on a whim. Fruit in the bottom of a baking dish topped with a mixture of flour, sugar, butter and oats is just about as simple as a dessert can get. The crumble mixture can even be made ahead and stored in the refrigerator for a few days, which keeps the butter nice and firm until you are ready to use it.

You can basically use any fruit combination that you like. I always have lots of frozen fruit on hand, because, while seasonality is nice, sometimes you just feel like something different. Frozen sweet cherries are one of my favorite frozen fruits because they are amazing for snacking on, believe it or not, as well as being nice in muffins or desserts. Cranberries are often hard to find fresh, though around this time of year they are more prevalent in stores. I decided to add the apple and the dried cranberries simply because their flavors work well with both the sweetness of the cherries and the tart cranberries.

The topping is very crisp and has a nice oaty flavor, rather granola-like. You could use any spice combination, but this is a nice all purpose one. It isn’t too spicy, but there is enough spice to give a little extra flavor boost to the fruit. Next time, I think I’ll add some diced candied ginger to the topping to spice it up even a bit more. This is great with ice cream or yogurt because the hot fruit melts the ice cream so nicely, while the crumble topping makes a very crunchy contrast.