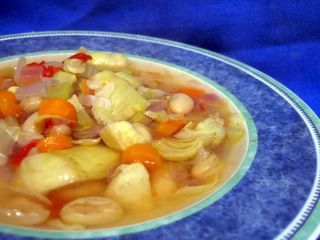 Now that the weather is really cooling off, I can indulge my desire for soup a bit more often. Though I do make soup during the summer, somehow a bowl of steaming deliciousness is slightly less delicious when the air temperature is the same as that of the soup. Soup is also a good excuse to bake more bread to serve with it.

This particular soup can from a rather unlikely source: Sunset Magazine. It’s not that they don’t offer recipes, it’s just that I suppose I wouldn’t ordinarily expect to be so inspired from them. Perhaps I will keep a closer eye on the Sunset recipe section from now on, because this soup is just delicious. It is also really easy, since it uses mostly canned ingredients. It’s the perfect thing for a weeknight dinner.

I adore artichokes, so their flavor in this soup really won me over. I used artichoke hearts packed in water, which I strongly recommend over those packed in oil. Not only does this avoid the unavoidable greasiness and extra fat, the flavor and texture of the artichokes is much better. I also opted to use white beans in place of the garbanzos that the original recipe called for and thinned the soup with some extra liquid. The end result is light tasting, but filling, as well as being remarkably satisfying. If you have leftover chicken sitting around in your fridge, you can shred some up and stir it into the soup, too, but it is excellent as is.

In a 5 or 6 qt. dutch oven or pot, heat olive oil over medium heat. Add onion, carrots and celery and cook until onion is softened, about 8-10 minutes. Add garlic and red pepper flakes, along with some salt and pepper, and cook for an additional minute. Add all remaining ingredients. Cover and bring to a boil. Redure heat and simmer for 15-20 minutes, until carrots are tender. Add salt and pepper to taste and serve with parmesan cheese, if desired.
Serves 6, with bread, as a meal.