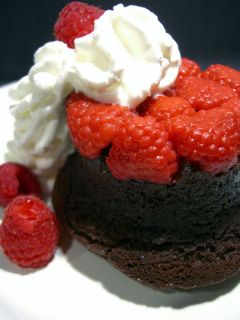 Gourmet Magazine’s September 2005 Cook the Cover contest ended yesterday. The featured recipe was fur a chocolate pudding cake called the Chocolate Mink. I couldn’t resist giving the recipe a shot, particularly when it was formulated for the convenient serving size of two portions. I decided that my addition to the recipe would be to add raspberries, since raspberries and chocolate make a wonderful combination. I layered them along the bottom of the ramekin and stirred a few into the batter.

I admit that I was hoping for a sort of raspberry sauce to form, but, though my little cake was neither puddingy nor saucy, it was still tasty. It looked gorgeous, unmolded very easily and was a nice, rich chocolate brownie cake. Baking uncovered gave it a nice crust and the raspberry layer made sure that every bite had a hint of berry to compliment the chocolate.

I’m not sure if it would have been a contest winner, but it definately proves that with good ingredients, you can’t go wrong even if you don’t follow the recipe.

Preheat oven to 350F and butter two 5 or 6 oz ramekins or oven safe dishes. Place a single layer of raspberries on the bottom of each ramekin. Reserve 2 tbsp of the berries and mash gently with a fork. Set aside.
In a small bowl, over a small saucepan of simmering water, melt together chocolate and butter. Stir in a pinch of salt and set aside to cool for 5 minutes. Whisk in egg yolk.
In a small bowl, beat egg white to soft peaks with the sugar. Fold 1/2 of the egg white and the mashed raspberries into the melted chocolate. Fold in remaining white until no streakes remain. Divide evenly into prepared ramekins.
Place ramekins into a deep baking dish. Fill the dish with hot or boiling water until it reaches halfway up the sides of the ramekins. Bake for 30 minutes.
Remove ramekins from water bath and allow them to cool for at least 20 minutes before unmolding the cakes and serving.
Makes 2.