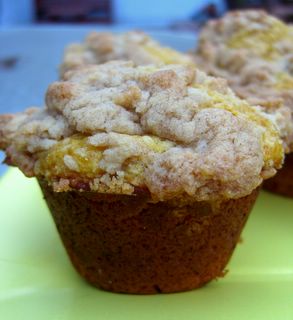 The holidays have a way of making time go by both very slowly and very quickly, which is why it has taken me so long to get this post up even though I intended to do it days ago. Fortunately for me, despite the fact that Thanksgiving is now over, pumpkins are considered to be winter fare, as well as fall. Of course, canned pumpkin means that you have have pumpkin all year long, though…. I digress. The point is that these are delicious muffins – delicious enough to make up for my delay in posting them.
Pumpkin muffins can often be rather heavy and dense due to the fact that there is so much moisture in the pumpkin. These muffins are neither. They have a very tender crumb that is fluffy and light, but very moist. Because they use both butter and sour cream, they can be quite rich, but you can cut back on the amount of fat slightly by using yogurt, either low fat or fat free. The taste will probably make up for any guilt you might feel from eating these, though. They have a good pumpkin flavor, but not overwhelming enough to put off even people who aren’t particular fans of pumpkin. The spices, and the hint of cinnamon in the streusel, really round out the overall flavor of fall.
I should also note that the instructions for the streusel below will make a bit more than enough to cover the muffins. You can either try to stack the extra on top of the muffins or store it in the fridge for a couple of days to use on a second batch. You can also half the recipe – but isn’t it better to have too much stresel than too little?

I really love pumpkin in any form that it comes in and I have to say that, in my opinion, these are realy excellent muffins. They can also be dangerously addictive, so you might want to have some people in mind to share them with.

Make the streusel:
In a medium bowl, combine all ingredients and rub the butter in until the mixture is crumbly. This will be a bit of a sticky operation because the butter is soft, but take your time. Once it is crumbly, gently squeeze bits of the mixture together to form larger pieces of crumble/streusel. Set aside.
Make the muffins:
In a large bowl, combine melted butter, pumpkin, yogurt/sour cream, eggs, and vanilla and whisk until smooth.
In another large bowl, sift together the flour, baking powder, spices and salt, then stir in the sugar. Add pumpkin mixture to flour mixture and sir until just combined. Divide batter evenly between the prepared muffin cups and top with streusel.
Bake for 16-19 minutes at 400F, until a tester inserted into the center of the muffins comes out clean.
Cool muffins in the pan for about 5 minutes to allow the topping to set up, then turn out onto a wire rack to cool completely.
Makes 12 muffins.