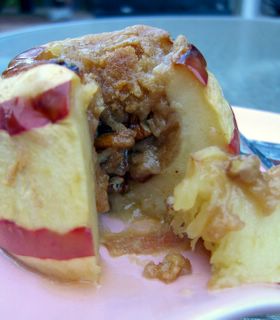 Baked apples are something that I don’t make very often because it is just so much easier and faster to eat the apple as it is. Of course, when you do that, you’re not getting the warmth and tenderness that a baked apple has, which can be very satisfying on a winter day.

The apples are very easy to make, since they’re basically just apples that are baked in the oven until they are very tender. Anything else – fillings, spices, etc – is completely optional. I recommend peeling off most of the skin before baking as it tends to get kind of tough. For the apples I made here, I used a potato peeler to remove a spiral strip, but it would be easier to peel vertical strips and would be equally as effective.

I used some of the streusel topping that I made here to top off the apples after removing the core and stuffing them when chopped pecans and raisins. It’s not an exact science, but I like the fact that having some flour in the mixture gives it a crisp top. You can just use sugar and cinnamon, if you prefer. The amount you’ll need of everything varies based on how many apples you’re going to make, but the baking time should be the same whether you’re doing one or a dozen. 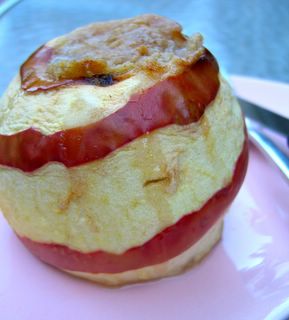 Preheat oven to 400F
Partially peel the apples and use a corer or melon baller to remove the stem and th center core. Do not go all the way through the apple (yes – you’ll have to eat around the very bottom bit after its cooked, but it’s worth it to keep everything inside the apple).
Place apples in an over-safe casserole dish.
Stuff apples with raisins and chopped pecans. Pack plenty of sugar in and or top of the apples.
Bake for 30-45 minutes (depending on the size of the apple) until tender. Check tenderness by inserting a sharp knife. When it comes out easily, the apples are done.

Serve as-is for breakfast, or with a scoop of vanilla ice cream for dessert!