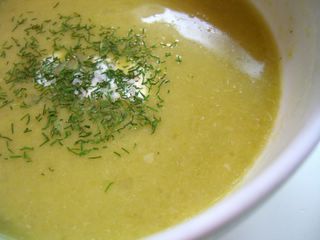 Before Thanksgiving, I usually think about savory foods. This is because I already know what I’m going to do in terms of dessert (pie, of course!), so I need to spend more time working out the other things on the menu, like soups and side dishes.
Last year, the soup course was some kind of potato soup that was uninspiring and perhaps a bit too heavy with the other potato dishes at dinner. I wanted to do something lighter and a little bit different, so I thought back to a very good artichoke soup I had at an Italian restaurant a few months ago and decided to aim for that flavor. I recall the waiter explaining that there was no cream and no potato, which is often used as a filler, in the soup, so I started out with a lot of artichokes. I used frozen because they’re just as good as fresh for soups and other cooked dishes and they take very little prep time. I added in a little bit of rice to help thicken the soup and ended up adding in some milk to smooth it out. You can use any type of milk in the soup, from skim milk to cream, based on how rich you want it to be. I used a combination of skim milk and light cream (half and half), which is pretty much like low fat milk.
Is it the same as the soup I enjoyed this past spring? No, but it does taste delicious. The flavor of artichoke really comes through and you’ll know exactly what it is you are eating. I highly recommend serving the soup with a sprinkle of dill – fresh or dried – and a dollop of sour cream or yogurt, as the dill really blends well with the artichoke flavor.
This soup can be served as a first course in small bowls or as a main dish with bread or half a panini sandwich.

In large saucepan or pot, combine all ingredients except for the milk and bring to a boil. Reduce heat to a simmer and cook for 45 minutes, until everything is very tender.
Using a hand blender (or working in small batches in a regular blender) puree the soup until very smooth. Slowly stir in the milk and, if necessary, blend again.
Season with more salt and pepper to your tastes, and serve with a small dollop of sour cream and a generous sprinkle of dill.