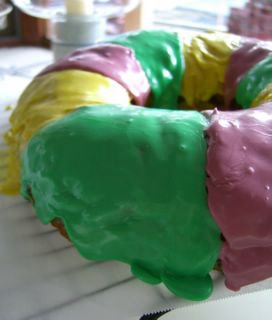 Mardi Gras is one huge party – there’s no denying it. One of the traditions of the celebration is a king cake. Generally speaking, the cake is actually a yeast-risen bread. Sometimes, it can be a sort of rich, danish dough filled with almond paste, but more often it seems to be a variation on a cinnamon bun, filled with sugary cream cheese. I know that the colors of the frosting are based in tradition, but I suspect that they are merely preserved because they’re festive and really dress up the bread. Everyone else dresses up in masks and fancy costumes – regardless of whether they are able to stay in them all night – so why not dessert?

I’ve never had a king cake before, but after checking out a Southern Living recipe, I decided to go with the cinnamon-swirl route and omit the cream cheese. Other recipes seemed more complex than I was willing to try, but I will (almost) never say no to a cinnamon bun. I decided to throw caution to the wind and come up with my own recipe.

The only problem I encountered in making this was that I didn’t give myself enough space to roll out my dough. As a result, some of the filling leaked out and turned into cinnamon-caramel on my baking sheet. Delicious, but not what I had in mind. Give yourself plenty of room to roll up the dough – like a kitchen table.

I deliberately kept the dough not too sweet to balance the icing and the filling, so the cake turned out to be balanced and delicious. It wasn’t any more difficult than making ordinary cinnamon buns and was really festive looking. I would definately consider making variations for, say, an Easter brunch or other spring gathering. I used skim milk, but using milk with a higher fat content will give you a slightly richer dough. 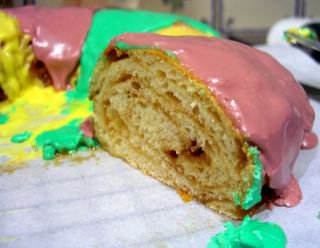 In a large bowl, combine yeast with sugar and 1/2 cup warm milk. Let stand for 5 minutes, until foamy. Add remaining milk, buttermilk (or sour cream), egg, butter, salt and 2 cups of flour. Stir vigorously, until smooth. Add remaining flour gradually, until a soft dough forms and pulls away from the sides of the bowl. Turn out onto a lightly floured surface and knead until smooth and elastic – about 5-6 minutes. Place in a lightly greased bowl, covered wih plastic wrap, to rise until doubled, 1 – 1 1/2 hours.
Line a baking sheet with parchment paper.
Mix brown sugar, cinnamon and allspice in a small bowl.
Turn dough out onto a lightly floured surface and roll into a large rectangle, about 16×10-inches, with the long side facing you. Brush dough with melted butter and spread evenly with sugar and spice mixture. Beginning with the long side and working away from you, roll dough into a log, jelly-roll style. Pinch long edge to seal. Place dough log onto prepared baking sheet and wrap into a circle. Line up unsealed ends and pinch together to seal the ring. Cover with a dish towel and let rise for 20-30 minutes.
Preheat oven to 375F while cake rises.
Bake at 375F for about 25 minutes, until golden brown.
Transfer cake to a wire rack and let cool for 15 minutes while you make the frostings.

For frostings: Mix about 6 cups of powdered sugar with a few tablespoons of milk and a dash of vanilla or lemon extract until smooth and spreadable. Divide into three bowls and add food coloring to each to obtain gold, green and purple frostings. Spread in thick bands onto cake while still warm. Let cool completely (Though it’s fine to pop your slice in the microwave to warm it up for a few seconds before you eat it!).