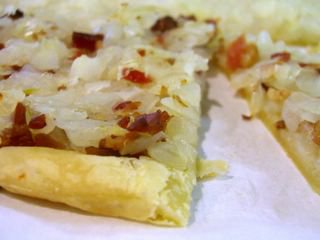 For this month’s French themed Is My Blog Burning event, hosted by Cucina Testa Rossa, I wanted something simple. I also wanted to make a tart. Unfortunately, the two don’t always seem to go hand in hand, but with the use of some store-bought puff pastry, I was able to make a delicious, simple and very French tart.

Alsatian Onion Tart is a traditional dish from the Alsace region of France. And no wonder it is a favorite that has stood the test of time. You cannot beat the flavor of the ingredients and it is easy to make variations by changing the type of crust or adding a few flecks of flavor to the filling. My father speaks fondly of a pub he ate at in France that served nothing by beer and onion tarts.

The tart had a delicious, sweet onion flavor, though the pastry didn’t get nearly as crisp as I expected, due in part to the low oven temperature. Suprisingly, I actually really enjoyed it this way, as the onions seemed to meld fantastically with the buttery pastry. I made the tart both with and without bacon and it is excellent both ways. I prefet it without bacon, but it’s a matter of personal preference. The bacon makes the tart a bit salty, so take care not to over-salt. I lightly salted the top of the tart – the part without bacon – when I put it into the oven instead of adding salt to the onion mixture after cooking. This worked out perfectly. Don’t cook the bacon unti it is crisp, since it will cook further in the oven.

My only question about the recipe was about how much “4 very large onions” was? I wonder if my onions – which were over a pound each – constituted “very large onions” or were so large as to be in a class by themselves. I trusted my judgment, which led me to put them in the latter category and used only 2 onions. It turned out that I had plenty of onion to work with, so I’m giving the weight, not the number of onions, in the recipe below. The only change I made to the recipe was that I omitted the cream. Truthfully, I completely forgot to add the cream. I don’t think the tart missed it, but feel free to put it in.

I highly recommend reserving the cooking liquid when you drain the onions. You will have about 2 cups and it makes a fabulous addition for soups or as a cooking liquid for just about anything.

Roll out puff pastry until it is 1/8-inch thick and cut into a 10 to 12-inch circle. Place on a parchment lined baking sheet and refrigerate at least 30 minutes, or up to several hours.
In a medium saucepan, combine onions and chicken broth. Cover and bring to a boil. reduce heat and cook until onions are very tender – about 25-30 minutes. Drain onions (reserving the delicious cooking liquid for later use in a soup or something) and let cool.
Preheat oven to 350F.
Toss onions in cream, if using, and a bit of salt and pepper. Add bacon, if using. Spread onions on rolled pastry all the way to the edge. Bake at 350F for 30 minutes, until light gold.
Serve immediately.
Serves 8.