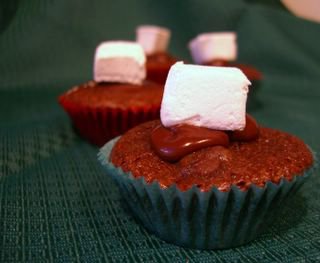 I think that the Hershey’s website is a little misleading.

I decided to make brownie bites like the ones Santos made last week. The recipe she used was a little too rich for me, calling for four sticks of butter. Admittedly, it made more than a few brownie bites, but still…. I went with Hershey’s recipe instead. Their photo shows brownies with a nice, crackly crust and these do not get crackly. I rather think that you need to use butter to produce a crust like that, not oil. I will give them the benefit of the doubt and assume that they accidentally posted the wrong photo.

The recipe was easy. I wanted them to be chocolatey, so I substituted bittersweet chocolate chips for the peanut butter chips suggested. I was suprised to see that the mini muffin wrappers held their shape when I just set them on the baking sheet, unsupported by a muffin tin. If your wrappers are thin, however, double up on them.

These were still quite tasty, even if they didn’t turn out they way the Hershey photo promised. They were rich little chocolate cake bites studded with chocolate chips. Each one was a bit more dense than your usual cake and the top crust was a little crisp, so I feel they were brownie-like in taste, if not entirely in appearance. I enjoyed them, particularly when they were warm and the chocolate was melty. The effect is easily produced with a few seconds in a microwave. I topped them with bits of my homemade marshmallows, but a mini marshmallow or a sliced up store-bought marshmallow will work just as well.

Preheat oven to 350F.
In a medium bowl, whisk together cocoa, vegetable oil, sugar and brown sugar. Whisk in eggs one by one, followed by vanilla extract.
In a small bowl, whisk together flour, baking powder and salt.
Add flour mixture to cocoa mixture and stir until just combined. Stir in chocolate chips.
Place 24 mini muffin cups on a baking sheet and fill evenly (about 3/4 full) with brownie batter.
Bake for 14-16 minutes, until just set and slightly firm to the touch. A tester should have a few crumbs.
Cool on a wire rack. Top each brownie with a few chocolate chips. As they melt, press a marshmallow into the chocolate. Let stand until set.
Makes 24.