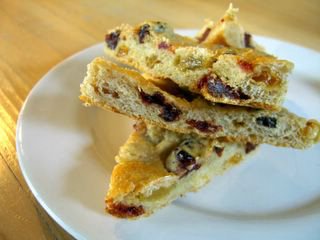 After seeing an article in my local newspaper for Martha Stewart’s Dried Fruit Focaccia, I wanted to make it. I love focaccia and one that is lightly sweetened and packed with dried fruit sounded delicious in general, as well as seeming like a good winter bread.

Unfortunately, I couldn’t find the recipe in my rather large pile o’ newspaper clippings and, eventually, opted to abandon my search and just wing it. To my dough I added dried tart cherries and golden raisins, both of which I remembered seeing in Martha’s version (which I finally found here, if you’re curious), and some cinnamon. I didn’t use sugar, used far less oil and ended up with a smaller bread than Martha’s. But, particularly considering I looked at the original recipe for about 30 secondes, it came out really well and was a very tasty bread. Since it is thinner than your average focaccia, it is also crisper. In fact, I discovered that this makes excellent toast, tasting just like cinnamon raisin bread – hardly suprising given both the cinnamon and the raisins in the recipe. The cherries were particularly delicious.

To get a softer version of this bread, I would shape this into a round, 9-inch focaccia, pressing it into an oiled cake pan. This would be thicker than my rectangular version, but at least equally tasty. Cooking time for a round will be the almost the same, but closer to the higher end of the range.

In a large bowl, combine yeast and warm water. Let stand for 5 minutes, until slightly foamy. Add in dried cherries, raisins, salt, cinnamon, 2 tablespoons olive oil and 1 1/2 cups flour. Stir to combine. Add remaining flour 1 or 2 tablespoons at a time until dough pulls away from the side of the bowl.
Turn out onto a lightly floured surface and knead for 3-4 minutes, until fairly smooth and elastic. The fruit may make it difficult to tell when the dough is smooth, so be sure to knead for 3 minutes if you are unsure. Place dough in a lightly oiled bowl to rise until doubled and cover with plastic wrap for about 1 1/2 hours.

Oil a 10 by 15 inch jelly roll pan (baking sheet with sides).
Place risen dough into prepared pan, stretching it into a rectangle as you place it. Oil your hands well, splay your fingers and gently press dough into a thin rectangle, covering most of the sheet. Cover with a clean dish towel and let rise for 30 minutes.
Preheat over to 425F.
Brush focaccia gently with a bit more oil and sprinkle with sugar. Bake for 20-25 minutes, until golden brown.
Cool on a wire rack.
Makes 1 focaccia