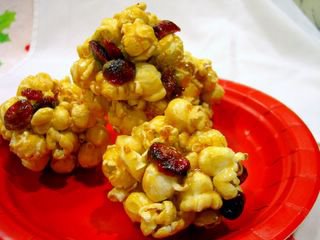 Popcorn has been around for about 5000 years. At a site known as the “Bat Cave” in New Mexico, an anthropologist and a botanist, along with several graduate students, discovered layers of prehistoric “trash” stretching back thousands of years, which contained all manner of corn cobs and even popped corn. There were many unpopped kernels so well preserved that they popped when placed in hot oil by the scientists.

Popcorn balls are a food around which legends have sprung up, though the truth is probably that it was easier for shop owners to sell popcorn in pre-measured amounts than it was to sell it loose. In fact, they were one of the most popular candies around the turn of the last century, when popcorn was enjoying huge popularity. Since the most popular time of year for popcorn is late fall, it is no surprise that popcorn balls quickly became favorite holiday treats. Though not as popular as they once were, popcorn balls are still a tasty treat and have a sort of retro cache about them that keeps bringing people back for more.

I think that popcorn balls are an easy way to eat popcorn. They’re not as fussy as many caramel corn recipes are, but they have a similar flavor. They also look very beautiful and will keep in an airtight container for at least a week or two. All you have to do is cook the syrup with a candy thermometer and stir it into the popped corn.

From start to finish, these take about 15 minutes. The maple syrup gives these a wonderful flavor, though you should be able to use molasses or treacle if it isn’t available to you. By cooking the syrup only to 250F (121C), which is hard ball stage, the sugar is still pliable enough to work with easily and the balls will not be too hard, which would make them very difficult to eat. I personally think that the dried fruit and nuts are a nice touch, but feel free to be a purist and leave them out.

Place popcorn in a large bowl.
Combine maple syrup and sugar in a small sauce pan over high heat. Bring to a boil and cook until the mixture reaches 250F (121C). Remove from heat and, while stirring, slowly pour it onto popcorn. Add dried fruit and nuts and stir until well coated.
Oil your hands lightly and, when mixture is cool enough to handle, but still warm, form into 3-inch (about Â½ cup) balls. Place on a sheet of waxed paper and allow to cool.
Store in an airtight container.
Makes 12.