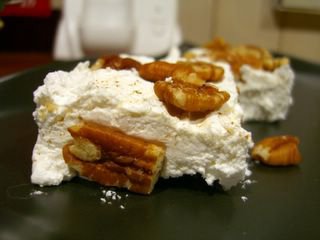 I don’t know when it happened that “sweet” became synonymous with both unsophisticated and undesirable in desserts. As though there is some level of sophistication past which your palate is too evolved to eat sugar. For the record, I don’t feel this way. I love sugar and candy is the perfect way to showcase it. In fact, this week I did a complete 180-degree turn from the anti-sugar sophistication and made a classic, Southern holiday treat: divinity.

Divinity is an ultra sugary treat that is balanced by the inclusion of nuts. It is sometimes called divinity fudge, as it is a textural cross between fudge and marshmallow, dense, light and smooth all at the same time. It is quite close to nougat, actually.

Though the ingredients are simple, I have always found divinity to be very difficult to make. This is because almost every recipe I ever looked at was identical. Identical and, frankly, not very good. Up until this time, I failed in every attempt I ever made to make divinity. Most recipes seem to not cook the sugar long enough and not direct you to beat the mixture for enough time; their divinities never set up. I went straight to the source for my new recipe, Karo Corn Syrup, on the theory that their product is such an essential ingredient in divinity, they must have a workable recipe. And they do have one.

For divinity, the sugar and corn syrup mixture is cooked to 260-266 degrees Fahrenheit, the upper end of hard ball stage. A candy thermometer is the best way to do this (If you want to try it without one, however, just drip a bit of the syrup into water. When it sets up in a stable ball that is pliable with your fingers, it is ready). The syrup is drizzled into beaten egg whites and beaten until it has cooled enough to set up firmly, which takes anywhere from 10-15 minutes. The beating is the point where most recipes fail, as they underestimate the beating time. The point of beating is not only to generate the divinity consistency, but to cool the mixture down to the point where it will set up quickly and maintain that consistency.

Pecans or walnuts – roasted and salted are always my preference – are folded in at the end and the mixture is pressed into a baking pan, like fudge, too cool before it is sliced.

Cut it into small pieces. It’s addictive, but too sweet for large chunks.

Line an 8×8 inch baking pan with parchment or wax paper.
In a medium sauce pan, combine sugar, corn syrup, salt and water. Bring to a boil, stirring only until the sugar is mostly dissolved. Cook over high heat until a candy thermometer reaches 260F, 20-25 minutes.
When the syrup reaches 260F, beat the egg whites to fairly stiff peaks in a large bowl. When they are ready, the syrup should be at about 265F. With the mixer running continuously on low speed, carefully drizzle the syrup in a steady stream into the egg whites. When all the syrup has been added, turn the mixer up to medium speed and beat for 4-5 minutes. The mixture should have thickened somewhat by this point. Add the vanilla and turn the speed down to medium-low and continue to beat until the mixture is no longer glossy and begins to stick to the sides of the bowl, pulling away from the beaters.
Quickly fold in 3/4 cup pecans. Spread divinity into the prepared pan, pressing the remaining 1/4 cup pecans into the top.
Allow it to set up for at least 2 hours, until completely cool, before slicing into small pieces.
Makes 1 pound of candy, or 36 small pieces.

Slime-Filled Cupcakes from the Black Lagoon