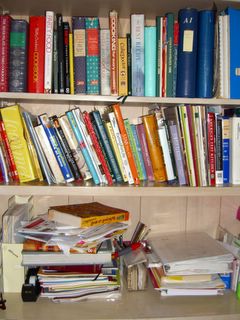 I knew I’d catch it eventually…. This is the cookbook meme started over at Spiceblog and sent to me by Mika. DOing this made me realise that I don’t own a lot of bread baking books. I tend to look online for recipes and insipration, or to grab one recipe from each book. I should really pick some up!

1. Rationale behind what we’re seeing?
This shelf is in a semi-hallway and nothing else fit it appropriately. As such, it became the cookbook self. There isn’t much order, nor are all my cookbooks on this shelf. But I wasn’t about to go hunting them all down for a photo. The top shelf has notebooks of recipe clippings from my mother that I don’t think I have ever look in, as well as the tall cookbooks that didn’t fit onto the middle shelf. The middle shelf is at eye level and should contain books I look at frequently, but my most frequently used books are often floating around the house and never make it to the shelf. I tend to set books down on the bottom there, along with stacks of cooking magazines. My EatingWell‘s are in the kitchen, along with a couple other favorites.
I get a lot of inspiration from other bloggers and the internet, too. 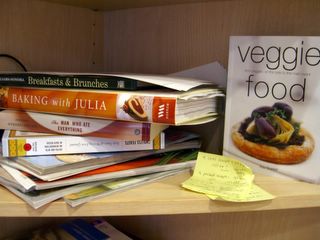 2. Most recommended?
The Best Recipe. It offers a ton of insight as to why things work a certain way – I learned a lot for this book.
3. Cookbook that made you what you were?
The thing that inspired me most, in terms of cooking, involved recipes, but was not a cookbook. When I first began watching Sweet Dreams, on the Food Network, I couldn’t believe that I had been missing out on so much. Gale Gand made it look easy. And you know what? It is.
4. Porniest cookbook?
Baking with Julia.
5. Sophie’s Choice cookbook?
Not making that call unless I have to.
6. If you were a cookbook, which cookbook would you be?
Which would I be or which would I like to be? The Joy of Cooking.
7. If your cookbook were extremely valuable, so valuable you might hide it with other valuables, where would that place be?
Since I seem to spend quite a bit of my money on cookbooks… I’d have to say I’d hide it on the shelf in my hallway!

I have to see what Niki has on her cookbook shelf!