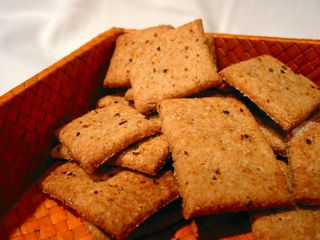 Due to my recent cracker making success, I decided to try my hand at making savory crackers. After much searching, and realising that there are not a lot of simple cracker recipes to be had, I came across this one by Mark Bittman. How can a man who wrote a book titled How to Cook Everything be wrong? Of course, I didn’t want some boring, plain flour crackers, so I made a few modifications.
These were simple to throw together, and had a good feel and texture. They weren’t quite as nice and flakey as store bought crackers, but that is probably because my butter wasn’t really chilled. They tasted good, though. The only real problem was that not all of my crackers were crisp all the way through. Most of them were cut in roughly one inch squares, but the slightly larger ones seemed to retain some softness in the center. Even the large ones firmed up as they cooled, but I think that I will be more careful about cutting them equally in the future.
I’ll definately make this recipe again. I like the seasonings I used (I have used them to make crackers in the past), but I think they would do very well with variations, like sesame seeds, black pepper, even brushed with vinegar and salt.

Sprinkle with salt, black pepper, cumin and paprika before baking

Combine all ingredients except water in a food processor and process until well combined. Add water and continue to process until mixture startes to come together into a dough.

Between two sheets of parchment or wax paper, roll out the dough into a rectangle of about 1/4 inch thickness. Refrigerate the dough for about 1/2 hour.

Remove dough from refrigerator and roll out to approximately 1/8 inch or less. Sprinkle dough with salt and/or toppings of your choice. Use a pizza cutter to slice into 1 inch squares, discarding excess dough. Score each cracker with a fork or several pricks of a toothpick. Transfer crackers to a parchment lined baking sheet and space out slightly.

Cool completely and store in an airtight container.