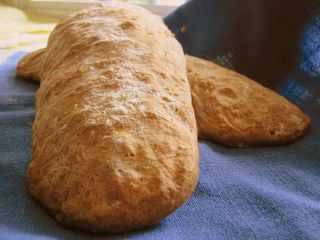 This loaf is one of the finest I’ve produced in recent memory. The interior was moist and chewy and the exterior was wonderfully crisp. It tasted so perfect. I think the reason that the texture turned out so well is probably the fact that it received only the barest minimum of kneading during its rises, hence there was very little risk that I would over- or under-knead it. 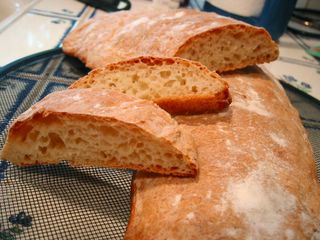 I used the recipe for the Very Lightest Ciabatta from King Arthur Flour but I made a few changes. The two minor changes were using active dry yeast instead of instant yeast and reducing the amount of olive oil to an amount that I would describe as a “splash”. It was probably one to two teaspoons.

The major change I made was not using the starter. But wait! Contrary to what you might be inclined to think, I don’t think this actually changed the recipe. I used about a cup of pizza dough instead. I made the dough last week and a chunk of it was still sitting in my fridge. The purpose of a starter is to simulate the incorporation of already leavened dough into a new loaf, a purpose that was accomplished successfully with the dough. Additionally, the pizza dough did not introduce any ingredients that were not already included in the bread. I let the dough sit out for about 4 or so hours to warm up and get a little bubbly. I then mixed it into the water/yeast mixture for the dough, added the flour… and the rest is according to the recipe. Since I used a baking sheet and not a stone (as I don’t own one), I set the loaves directly on the oven rack for the last 5 minutes of baking time to make sure the bottoms of the loaves were crisp.
Next time you have pizza dough in the fridge, remember that you can use it in place of the starter in this recipe. It’s worth it.

It tasted so good that I had eaten almost the entire first loaf before my soup was ready. Thanks, Anne, for the recipe! 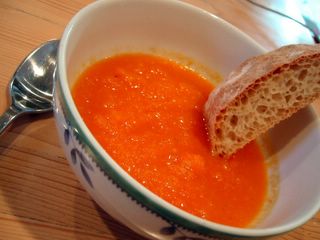 Why you need a cooling rack

Can I substitute for maple syrup?