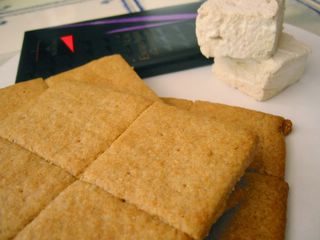 I’ve been wanting to try homemade graham crackers for some time now. I even went out and bought a cookbook, Retro Desserts by Wayne Harley Brachman, that I knew would have a recipe for it. These grahams use both honey and molasses, so the flavor of molasses isn’t overwhelming and the cookies have a nice sweetness. The cookies turned out to be amazingly tender and delicious – much more irresistible than a box of store-bought crackers, to say the least. The recipe only calls for a small amount of graham or rye flour, but you can actually substitute whole wheat flour in their place if you don’t have either of these specialty flours in your kitchen. I tried both ways and the whole wheat grahams turned out to be just as delicious as the others with a crisp and slightly flaky texture to them.

I whipped them up in the food processor in no time. The dough was incredibly easy to roll out and it could be balled up and rerolled to use up any scraps. The only change I would really make to the original recipe is to roll the crackers out thinner than the 1/4 inch called for, since I they didn’t get quite as crispy as I liked at that thickness. Instead, I aimed for 1/8 inch when rolling them out. The crackers ended up rising just the right amount in the oven – but feel free to shoot for a thicker cookie if you want something heartier.

These crackers can be eaten as-is, used in a batch of s’mores or ground up into graham cracker crumbs for a pie crust. In fact, you could even try using a whole sheet of this dough as a pie crust, too, if you don’t mind doing a little experimenting. After this, it might be difficult to go back to store-bought.

I would say that these had a lot more flavor than store bought graham crackers and a slightly more rustic texture. They were more substantial and much tastier overall. I would make them again in a heartbeat. I also discovered that they stay crispy when stored for several days in a airtight container, which is great because I can’t imagine wanting to eat a mushy graham cracker!

The recipe was also used on an episode of Sweet Dreams. I’ve copied it below with my (minor) alterations, but the original can be found here.

In a food processor, mix together the flours, sugar, baking powder, baking soda, salt, and cinnamon. Add the cold butter and process until the mixture resembles coarse meal, about 30 seconds or so. Add the honey, molasses, water, and vanilla. Mix until the dough startes to come together in a ball, another 30 seconds. Scrape dough out of the mixer.
Between 2 sheets of waxed or parchment paper, roll the dough 1/8-inch thick. Chill for at least 1 hour, until firm (I chilled for several hours).
Preheat oven to 350F. Retrieve dough and roll it a bit more if it is not yet 1/8-inch thick. With a sharp knife or pizza cutter, cut into 2-inch squares. Arrange the crackers on parchment lined baking sheets. With a toothpick, prick several holes in each cracker.
Bake for 15 minutes, until lightly browned at the edges. Remove from the oven and let cool on the pan.
Yield: 48 crackers

Note: If you cut the dough through but leave the squares together, you can break them up after they’re baked, just like a store-bought graham!