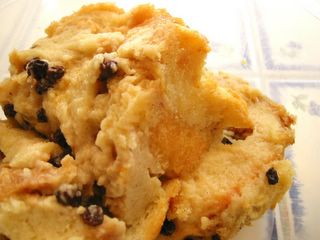 Today in class, we discussed the various properties of milk (from skim to devonshire cream) and eggs and their uses when preparing custards. Interesting stuff. For example, I didn’t know that if you over beat heavy cream you will end up with butter. You will also end up with quite a bit of whey because cream is somewhere from 36-40% fat. The main point of all this discussion was to learn how dairy and eggs can combine in various ways to produce different textures of custard. Once the lecture was over, we worked on preparing a variety of custards.

I do not like overly rich or creamy desserts. I particularly dislike the unctuous mouthfeel of the ultracreamy variety of dishes we prepared today. This is not to say that they did not taste good, as they were excellent; I simply have no desire to eat these things unless there is something to cut their texture. We made vanilla bean ice cream, butterscotch pudding, chocolate mousse, bread pudding and, of course, crÃ¨me brÃ»lÃ©e. Essentially, cream, butter and cream, cream, cream and egg yolks and cream.

The ice cream was insanely creamy with an outstanding vanilla flavor from the two whole vanilla beans used in it. The butterscotch pudding was, unsurprisingly, also very creamy and the flavor was excellent. The trick to a smooth pudding is to take the pan off the heat for a few moments if it starts to get lumpy, not to turn the heat down. The chocolate mousse was very, very chocolately and was made with dark chocolate. I probably would have enjoyed it more if it had not been preceded by several other desserts and topped with whipped cream.CrÃ¨me brÃ»lÃ©e is crÃ¨me brÃ»lÃ©e. At least I got to play with a torch.

The bread pudding, made with brioche in case the custard wasn’t rich enough, is shown above. It is studded with pecans and brandy-soaked currants. It was my favorite of the dishes because it had more textural variation than any of the others but I know it would have improved greatly with a pinch of salt to bring out flavors other than cream. We baked it in a loaf pan, which I thought was unusual until the instructor explained that serving a glop of runny custard doesn’t look very impressive in a restaurant. Therefore, we bake it in a loaf and serve it in slices, which are easier to plate and garnish. And what might we use for garnish? Oh yes, how about some more whipped cream.

Baking Bites at the Bake Off