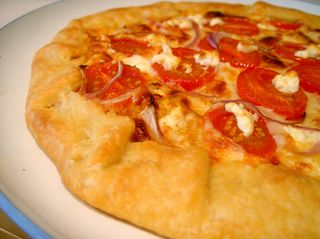 Retrospectively, given that I had never made a galette before, I would say that adding one to the Easter brunch menu on Sunday morning, mere hours before the guests arrived, was necessarily the wisest decision. But I was concerned that there wouldn’t be enough food and I wanted to add something savory, as I had the sweet pretty well covered. A galette, I had heard, was easy to make and impressive in its rusticness. I whipped out Baking with Julia, a new acquisition, and flipped through the lovely illustrations until I stopped on her Cheese and Tomato Galette.
I rubbed the butter into a flour and cornmeal mixture to make the dough, nearly panicked because the recipe called for adding rather too much liquid, wrapped it up and stuck it in the fridge. The dough was rolled out, topped with tomatoes, mozzarella and montery jack cheeses (per the recipe) and feta (per me) and slipped into the oven.
It looked flakey and crisp as I sliced it. It disappeared in a matter of seconds from the food table. So why, you may ask, have I not posted the recipe? The reason is simple: I have no idea what it tasted like. It was devoured before I could taste it and, somehow, I didn’t get much feedback on the level of flakiness in the crust or their feelings about the ratios of cheese types from people stuffed on what was previously a delightful looking Easter Spread. “Urmm…” and “Good…” were not the responses I was looking for.
Their kids, however, were slightly more useful.
A thirteen year old: “That looks like something from Gelsons!” Gelson’s is an upscale market.
A sixteen year old: “Did you buy that?” I asked her if she liked it. “I thought it was going to be pizza. But it was good.”
A nine year old, who left the “crust” of one slice untouched: “Did you stuff the crust with cheese?” In a galette, the crust is folded up over part of the filling. Yes, I said. But that’s not pizza. “Oh.” Did he think it was pizza? “It looked like a pizza.” Did you like it? “It was ok. There wasn’t any sauce.”
I suspect that the galette tasted pretty good. I may have over-mixed the crust a bit, but I’ll be making this again. Probably with a different filling. One that doesn’t inherently resemble pizza.