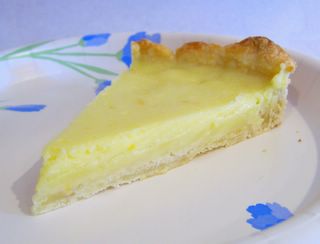 Meyer lemons, the non-bitter lemon hybrids that are growing in popularity with cooks everywhere by leaps and bounds, are in season right now. It is much easier to find them at stores and markets than it was only a few years ago, and more people are familiar with them as an ingredient. Even if you’re not, the only thing you need to know is that they seem sweeter than the average lemon but no less lemony.
I’ve used them in scones, quickbreads, cakes and risottos, but they can be used in place of lemons in any recipe. With this in mind, I didn’t hesitate to substitute them in for the regular lemons in this recipe for a Foolproof Lemon Tart from the LCBO magazine, Food & Drink, which is one of my favorite recipe sources.
The tart is, as promised by the name, pretty foolproof. The “hardest” part is the crust because it needs to be prebaked. Prebaking basically means that you bake the crust after filling it with pie weights or dried beans to prevent the crust from getting soggy once the filling is added and to stop it from puffing up during baking once the filling is added, which could ruin the look of the finished tart. Prebaking a crust like this one is no different from prebaking a graham cracker crust, so there is no need to be intimidated by it in a recipe even if you’re a novice baker.

There is a bit of lemon zest in the crust, but the star of the tart is the lemon filling. Not only is it incredibly simple, but it is bright, perfectly balancing sweet and tart flavors so that all you taste is lemon. It is also very smooth and light. The tart would probably be quite refreshing during the summer, but in winter, it is a nice change from heavier, spicier desserts.

For the crust:
Preheat oven to 425F
In a food processor, combine flour and sugar and pulse to blend. Add butter and pulse until mixture is coarse and sandy. Add in egg yolk, lemon juice and lemon zest and whizz until dough starts to come together, adding an extra tablespoon of water or lemon juice, if necessary.
Turn dough into bowl and knead gently until it forms a ball.
Place dough on a lightly floured board and roll until it is large enough to fit a 9-in tart pan. Lay dough gently into pan and press (do not stretch) into the corners. Cut excess from the top of the pan.
Prick the crust with a fork and place a sheet of foil on top of it, filling with pie weights or dried beans. Bake for 15 minutes, then remove the foil and beans and bake for 5 more minutes. Set aside to cool slightly while you make the filling.For the filling:
Reduce oven heat to 350F.
In a medium bowl, whisk together eggs and sugar. Whisking steadily, add in melted butter, lemon rind and juice. Pour into pastry shell.
Bake for 15 to 18 minutes, until the filling is set and jiggles only slightly when the tart pan is pushed.
Cool before serving.