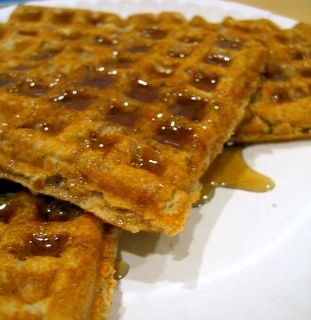 I know that I’ve mentioned before how I don’t like breakfast to be a fattening affair. Once in a while? Sure, but because I really enjoy breakfast foods and want to have them more than once in a blue moon, I like to work out ways to have my cake – waffles, in this case – and eat it, too.

These waffles are based on a recipe that a friend gave to me, so I’m not sure where they originated, but when I first made them I was surprised that they came out as well as they did. After all, waffles are usually generous about the amount of fat that they use, so to see a recipe for a waffle that didn’t use butter, oil or eggs, but still turned out to be quite tender and, if you grease the iron well, they will come out crisp, just as you would expect any other waffles to. Greasing the iron is very important with this recipe because they can stick even in a nonstick pan.

The waffles are flavored with a combination of spices that is often used in apple pies and other apple-flavored baked goods. It brings out the subtle sweetness of the applesauce and goes very well with maple syrup.

Combine all dry ingredients in a large bowl and stir together. Add in milk, apple sauce and vanilla and stir until just smooth.
Preheat waffle iron, grease well with cooking spray (even if it’s nonstick) and cook waffles according to the manufacturer’s instructions.
Serve immediately, with plenty of syrup.

Makes 2-4 waffles and serves 3-4, depending on the size of your waffle iron.