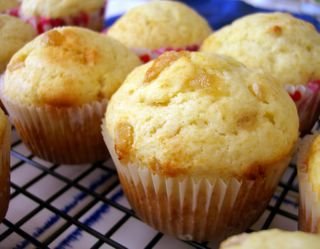 While we were at BlogHer, Elise told me a story of some semi-disastrous lemon muffins that she had recently tried to make from a recipe given to her by a friend. What precisely caused the muffins to fail was a mystery, since the friend who supplied the recipe later had the same difficulty, despite the fact that she had succeeded with the muffins in the past.
It was with those muffins in mind that I put together this recipe for Lemon and Candied Ginger Muffins, though you can rest-assured that my recipe is completely unlike the unsuccessful one I just mentioned.

These muffins, instead of being made with lemon juice, are only kissed with lemon through the use of lemon zest in the batter. The lemon flavor is boosted by adding an easy lemon glaze after baking. The glaze is added when the muffins are still slightly warm so that it almost melts into the top of the muffin.

The muffins themselves are very light and tender, in large part because I creamed the butter and sugar together, as I might do for a cupcake. These aren’t sweet enough to be mistaken for cake, but at the same time, they don’t fall into that trap of not having enough sugar in them, as some muffins do. They have an excellent balance overall and can be eaten plain, with a cup or tea or coffee, as well as with a bit of butter at breakfast.

The candied ginger boosts the sweetness of the muffins and provides a little crunch every time you encounter an unusually sugary piece. I actually use the crystallised ginger chips (pre-cut candied ginger) from the Ginger People, which have a higher sugar-to-ginger ration than most, but still carry across a lot of ginger taste, especially if you eat them more than a few at a time.

Preheat oven to 400F. Line a 12-cup muffin tin with paper liners.
In a medium bowl, whisk together flour, baking powder and salt.
In a large bowl, cream together the butter and sugar until light. Beat in the eggs, one at a time, followed by the lemon zest and vanilla extract.
Alternate adding the flour mixture and the milk to the butter/sugar mix, working in two or three additions and beating at a low speed (or by hand) only until just combined. Stir in candied ginger.
Divide batter evenly into prepared muffin cups and bake for about 15 minutes, until a tester comes out clean and the top of the muffin springs back when lightly pressed.
Cool on a wire rack, drizzling with lemon glaze (below) while muffins are still slightly warm.

In a small bowl, combine confectioners’ sugar with enough lemon juice to make a glaze that will drizzle easily from the tines of a fork. You don’t have to be exact, and can always add either a bit more juice or a bit more sugar to achieve a good consistency.
Drizzle a little glaze over each muffin and let dry for at least a few minutes before serving.