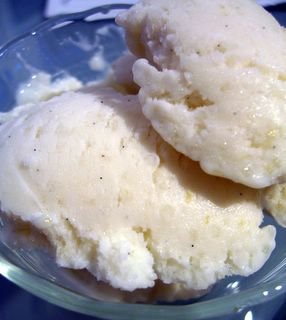 I know that I’ve been doing a lot of ice cream posts lately, but with the temperatures getting to over 100F on a regular basis here over the last month, it’s hard not to want a lot of cold food. Besides, I tend to make small batches of ice creams – not to mention that Sarah’s chosen theme for this month’s Sugar High Friday was cold desserts!

So, I’m not going to apologize for not doing a lot of baking lately, but I do promise to back of the ice creams for… at least a day or two. In the meantime, I encourage everyone to buy and ice cream maker.

Anyway, I wanted to do something a little bit different. I had heard the idea of rice pudding ice cream mentioned by a few people in passing and, the more I thought about it, the more appealing it sounded. I tried it and I loved it. It’s just as easy as making rice pudding, chilling it and dumping it into an ice cream maker. This means that you could actually buy some rice pudding and do the same thing, if you don’t want to make it yourself.

I made my favorite rice pudding recipe, which I like because you don’t need pre-cooked rice for it to work. I used milk, instead of cream, because I felt that the starchiness of the arborio/short grained rice that I used would serve to add a thicker, richer texture to the final product. Skim milk or low fat is completely fine for this recipe, and soy milk will work well, too. If you want to make the ice cream richer – by which I mean more fattening – and lighter in texture at the same time, fold 1/2 cup of unsweetened whipped cream into the pudding before putting it into the ice cream maker.

The ice cream is very creamy, with some texture and a bit of chew from the rice. Think of it as having sprinkles (uh, very tender sprinkles) mixed into the ice cream – and that texture really sets it apart from plain ice cream and makes for a nice change. I used a lot of vanilla in my pudding, but you can add cinnamon or other flavored extracts, too.

Combine rice, sugar, water and vanilla bean in a medium sauce pan. Bring mixture to a boil, stirring to dissolve the sugar, then reduce to a simmer until all the liquid has been absorbed, about 45 minutes. Carefully remove vanilla bean. Scrape out the seeds and stir them into the rice.
Stir in the milk and, keeping rice over low heat, bring to a simmer. Remove pudding when it begins to bubble, after 20-30 minutes. Transfer pudding to a large bowl and refrigerate at least 4 hours, or overnight.

Pour into ice cream maker and freeze according to the manufacturer’s standard directions for regular ice cream. Scrape into a freezer-safe container and freeze for at least 30 minutes until serving.Serves about 6.

Note: If you want to stir in some raisins at the end of the churning, feel free. I’m not a huge fan of raisins in ice cream, personally, but they do taste great in rice pudding.