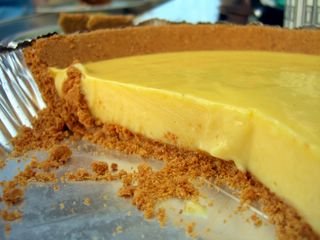 I don’t like baked key lime pies. Some people say that they taste the same (or very similar), but I still object. The pies are baked because of a fear of salmonella or other potentially egg-borne pathogens. The fact of the matter is that the acid in the fresh lime juice that is used to make the pie actually “cooks” the eggs, thus destroying anything harmful that might have been in them. Dishes like tartar and ceviche, where the fish is “cooked” with lemon or lime juice operate under the same principle. If it’s good enough for fish, it’s good enough for pie.

Part of the allure of the key lime pie, aside from its bright, tart flavor and incredibly creamy texture, is the fact that it has four ingredients, including the crust. Technically, the crust has more than one ingredient (graham crackers, butter, sugar), but because the pie filling is so simple, it sounds much better to phrase it that way. And if you buy a pie crust, so much the better.

The ingredients are egg yolks, sweetened condensed milk and fresh key lime juice. Key limes are smaller and more tart than regular (Persian) limes, but I have never found my pies to be lacking in tang despite the fact that I don’t use key limes. It is imperative that you use fresh lime juice for this pie, as many “juices” in the store are reconstituted or contain preservatives that you don’t want in the pie.

As I said before, the pie is tart, refreshing and incredibly creamy. The lime juice-“cooked” yolks give just enough structure to the pie to make it sliceable. I like it plain, but whipped cream is the most popular accompaniment.

In a large bowl, beat egg yolks and sweetened condensed milk with a large whisk until smooth. Whisking constantly, stream in lime juice and stir until smooth and well-combined. Pour into pie shell.
Refrigerate for at least 4 hours, preferably overnight.
Serves 8.

(Disclaimer: All this said, I know that there are some people whose doctors tell them to avoid even a hint of undercooked food. If so, you may want to consider that advice when making a key lime pie. I’m a baker, not a doctor.)