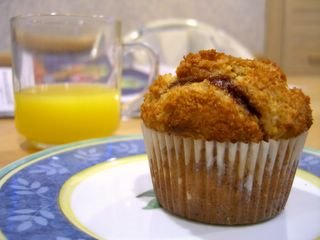 I am always tempted to add something to muffins, whether it is fresh fruit, dried fruit or some sort of other tasty tidbit. I resisted temptation when making this muffin to keep it as simple as possible. And it turned out well.

Don’t get me wrong, I love fruit in my muffins. The problem is that sometimes we get into ruts with that we make. For example, I have put blueberries (fresh or dried) into almost every single batch of muffins that I have made in the last few weeks. It’s nice to do something to break up the monotony, if for no other reason than to avoid getting tired of a favorite flavor. Cinnamon also happens to be a favorite of mine, though I don’t use it enough as a stand-alone spice. I tend to add a pinch here and there, using it as an accent.

These muffins were very cinnamony and I loved that about them. The flavor actually reminded me a great deal of the cereal Cinnamon Toast Crunch and the crumb was light and even. I’m glad that I resisted the impulse to add anything else into the batter, letting the cinnamon shine, but these would be good with a few chopped walnuts (if you like nuts) or perhaps even dried cranberries…

Though they resemble coffee cakes, they don’t have the same buttery crumb. I personally find this to be a nice feature in a muffin, since I don’t want something loaded with tons of butter for my daily breakfast. To change the cinnamon-sugar mixture into a crumb topping, simply stir in 1 tablespoon of very soft butter into the mix before using it.

Oh – there is one more thing to note about this recipe. I only made 11 muffins and not 12. There are two reasons for this. First of all, if you add 1/2-1 cup of nuts, chocolate chips, chopped banana pieces, etc, you will need that extra cup to use the extra batter. Second, the muffins will be puffier, with prettier tops if you make only 11.

Preheat oven to 400F. Line 11 muffin cups with paper liners.
In a medium bowl, whisk together flour, baking powder, baking soda, salt and cinnamon.
In a large bowl, whisk together sugars and the egg until smooth. Beat in vegetable oil and vanilla. Working in 2 or 3 additions, alternate adding the flour and the buttermilk to the sugar mixture, stiring until just combined.
In a small bowl, stir together remaining brown sugar and cinnamon.
Fill each muffin cup about 1/2 full. Sprinkle with a scant 1/2 tsp of the brown sugar mixture into each cup. Evenly divide remaining batter on top and sprinkle with remaining sugar mixture.
Bake at 400F for 15-18 minutes, until a tester comes out clean.
Transfer to a wire rack to cool completely before eating.