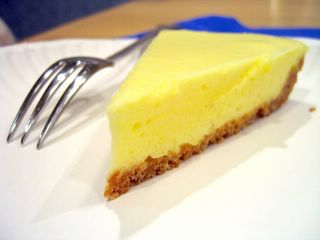 . It was delicious and very impressive looking, piled high and pink in its crust. It was described as being a fruit mousse piled into a pie crust, which is exactly what it is. Come to think of it, Wayne Harley Brachman actually has a recipe for Lemon Chiffon Pie in his cookbook. I probably should have used his recipe as I’m sure it would have been fantastic. It is, however, a bit more complex that the recipe I chose to use, which is adapted from one found on Allrecipes.

A chiffon pie will always be incredibly light in texture due to at least one of two factors: it will either have whipped cream/Cool Whip folded into it, or it will be supported by a meringue made of egg whites. Either way, it is likely to have gelatin in it to give it stability, too. The easiest way to think about it, if you have never had one, is to imagine a lemon meringue pie where the lemon curd and the meringue have been folded together.

This pie is smooth and sweet, but has a good lemon flavor. There is enough sugar in the recipe that the pie doesn’t need any whipped cream during serving to tame the bite. In fact, if you want it to be tarter, simply reduce the amount of sugar beaten into the egg whites by 1/4 cup. It tastes best on the day that it is made, when the mousse is at its fluffiest and the crust is nice a crisp, providing a great textural contrast.

It’s a very easy pie to make, in all honesty, and a good choice for beginners. It is impressive looking and tasty, but doesn’t involve making a double crust from scratch or trying to pick out just the right kind of fruit. Another selling point (beyond the flavor) is that it has some retro appeal, having been at its height of popularity in the ’40s, ’50s and ’60s. Vintage is in right now, isn’t it?

Soften gelatin in 1/4 cup water for aboout 10 minutes, while you prepare the yolks.
In a large glass bowl, beat egg yolks with 1/2 cup of the sugar and the salt until combined. Gradually pour in the lemon juice and salt. Place bowl on top of a pan of simmering water (a double boiler) and cook whisking frequently, until the mixture has thickened, 10-15 minutes. Add lemon zest and gelatin and stir thoroughly until gelatin has dissolved. Transfer to a clean bowl and refrigerate until it begins to set up but is not totally firm (as bad as it sounds, “gloppy” is a good texture to shoot for here). Timing will vary, but check on it and give it a stir every 20-30 minutes for about 1 1/2 hours.
When the gelatin mixture is thick and cool, beat the egg whites in a large bowl until soft peaks form, gradually pouring in the remaining 1/2 cup of sugar once the egg whites are foamy.
Once you have soft peaks, beat 1/4 of the whites into the gelatin mixture with the electric mixer, which will lighten it and smooth out the consistency. Using a spatula, fold the rest of the whites into the lemon mixture.
Pour filling into the prepared crust and refrigerate for at least 2 hours before serving.