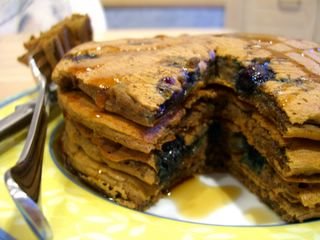 Buckwheat pancakes are one ot the two types that most frequently appear on restaurant and diner menus, the other being buttermilk. As a kid, I always avoided them because I was suspicious of their darker brown appearance, but not I know better.

Buckwheat flour on its own has a strong and somewhat bitter taste, but it becomes very interesting and complex when used with other things. It is gluten free, so it often appears in gluten free cookery and baking. The bitter taste is fairly easily tempered by mixing the buckwheat flour with other ingredients. All-purpose flour (ap flour) will help rein it in, but one of the most commonly added flavors to buckwheat seems to be molasses, proably since it, too, has a strong flavor.

In any even, these pancakes are neither bitter nor overly sweet. The recipe comes from the Post-Gazette’s recipe section, where they are called Cape Cod Buckwheat Cakes. I did add a bit of brown sugar to round out the final flavor. The pancakes come together very easily and taste delicious. They taste of lightly sweetened whole grains and are very, very light, in no small part because buckwheat flour is gluten free. I added blueberries, but fresh and dried, to the batter once I spooned some onto a hot grill. The blueberries added enough natural sweetness that I really didn’t need a lot of syrup on the pancakes, but I preferred the dried slightly over the fresh.

Keeping with diner tradition, I actually went ahead and made these the size of dinner plates, but the recipe makes quite a few more normally sized cakes, even if they’re not quite so impressive to look at.

Beginning the night before, stir together milk, yeast, buckwheat flour, all purpose flour and salt. Cover with plastic wrap and refrigerate overnight.
In the morning, stir in molasses, brown sugar, baking soda and egg.
Heat a lightly greased pan or griddle over medium-high heat and spoon batter on to produce pancakes of desired size (I made plate-sized ones). Add blueberries to pancake on griddle. Cook until pancakes beging to bubble and look slightly dry at the edges, then flip and cook the remaining side until golden.
Serve immediately, with butter or maple syrup, as desired.

Serves 4, depending on appetite.