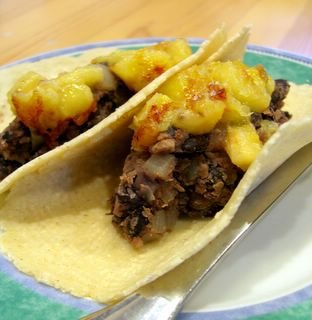 I know that not every food blogger will feel this way, but I like Rachael Ray. I actually met her, albeit at a book signing, about a year ago. She’s just like she is on her shows: happy, cheerful and full of smiles. I belive that she is 37, but she seems younger. In any event, even if you aren’t a fan of her perky nature, she has done a lot for home cooking. For many years, even if people wanted to cook for their families, they couldn’t spare the time or they thought they couldn’t spare the time. Now, people are encouraged by seeing quick and delicious meals on TV and are getting back into the kitchen. I like Rachael for that.

For this Is My Blog Burning event, hosted by Too Many Chefs, the theme was make a meal in 30 minutes. I was tempted to use a Rachael Ray recipe, since I do have more than one of her books (and a signed one, no less), but I decided to go with something a little more unusual. I started browsing Epicurious and came up with their recipe for Banana-Black Bean Empanadas. It involved caramelised banana slices and spiced, mashed black beans stuffed into a golden, crispy empanada – delicious and a little out of the ordinary, with a bit of caribean flair. But the recipe took more time than I was prepared to spend, not to mention that fried puff-pastry anything is something that I would rather save for a special occasion than have as a weeknight supper. I took the filling and wrapped it into homemade corn tortillas. I’ve had a lot of practice rolling tortillas, so the whole thing took me less than 20 minutes. If you use store-bought corn tortillas, you can have dinner on the table in 15.

Did I mention that they taste good, too? I loved the sweetness of the bananas and how they moistened the bean filling. I also loved the crisp, caramel-y edges of the bananas that had been seared into the pan.
I doused the tacos with some chipotle salsa before serving. Delish.

Heat vegetable oil over high heat, dice banana while heating. Add banana to skillet and cook for about 2 minutes, until golden.
While banana cooks, dice onion. Remove banana from skillet and set on a paper towel to drain. Add onion to skillet and reduce heat to medium. Cook onion until tender, about 3 minutes. Add beans, cilantro, cumin and cayenne and cook until heated through. Mash beans with back of fork and add salt and pepper to taste.
Place about 1/4 cup beans in each tortilla and top with caramelised bananas, as well as cheese and salsa, if using.
Makes 8 tacos.Tagged with: IMBB24 + 30Minutes