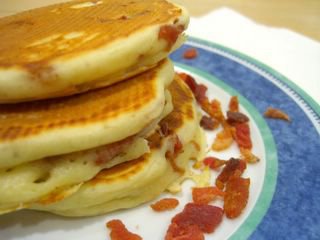 Most pancake breakfasts in restaurants are served with a side of bacon. In some of the larger portion establishments, the pancakes come with eggs and toast as well. I don’t know about you, but once I’m being served a meal that takes up three plates, the likelihood that I will be able to finish it decreases dramatically. So let’s forget the eggs and toast and cut right to the core of the meal: the pancakes and the bacon. Grains, proteins, maple syrup – sounds balanced to me.

In the interest of convenience, I have combined the pancakes and bacon into one food item, streamlining the breakfast process.

I really love this pancake recipe. The pancakes are light and fluffy, not to mention incredibly delicious. They are easy to whip up and, best of all, are basic enough to be subject to multiple variations. I alsoÂ have a chocolate chip versionÂ of this recipe,Â  in addition to the bacon one.

The main difference between the two types is the mixing. The bacon should be mixed into the buttermilk batter and the chocolate chips should be dropped on top of the pancake while it is cooking on one side. The reason for this is that chocolate, as it melts, may leak out onto the grill, making it much more difficult to produce a clean pancake. In addition, the chocolate might burn if it is left on the heat. The worst that can happen to the bacon is that it will become more crisp – which isn’t all that bad.

Keep the vanilla in the pancakes whether you are making the bacon or the chocolate chip variety. Trust me. The ever so slight flavor in the bacon pancakes makes them much more delicious. Maple syrup is optional, as you don’t really need it for either variation.

In a large bowl, mix together flour, baking powder, baking soda and salt.

In a small bowl, whisk together egg, buttermilk, melted butter and vanilla. Pour wet ingredients into flour mixture along with the bacon and stir until combined but a little bit lumpy to avoid over mixing.
Heat a lightly greased skillet over medium-high heat. When a drop of water sizzles on the surface, drop heaping spoonfuls of batter onto the skillet, making 3-inch pancakes. Cook until golden brown on each side, flipping only once.
Serve immediately, with maple syrup, if desired.
Makes about 15 pancakes.
Serves 3-4.