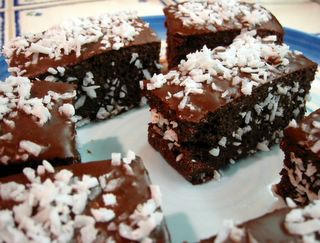 If you have never been to Australia, you have probably never had a lamington. If you are an Australian (or are from New Zealand), you have probably had quite a lot of them.
Lamingtons are an Australian snack cake consisting of squares of sponge cake dipped in a chocolate icing and rolled in desiccated coconut. Sometimes they have a layer of jam in the middle of the sponge. They were originally created as a way to use up leftover or stale sponge cake, because the chocolate coating will add and lock in moisture. The coconut is added because coconut is great. You could, I suppose, use chocolate sprinkles if you really cannot abide coconut. I would not try and pass this off as a lamington, though.
The chocolate layer is not melted chocolate, but a mixture of milk, cocoa powder and confectioners sugar with a tiny bit of butter added for flavor. This glaze is easy to handle and firms up quickly. It is not greasy and makes the whole snack very easy to handle and transport.
Judging from some of the greasy, dry lamingtons I’ve had, it is clear that some bakers have taken the “stale cake” idea to extremes. This is particularly apparent because lamingtons seem to be getting larger and it is significantly more difficult to choke down multiple mouthfuls of overly dry cake. They also seem to have enbraced the belief that using real chocolate, regardless of how much oil or shortening it is mixed with, is superior to the traditional icing, rendering the entire lamington greasy and difficult to handle.

Preheat oven to 400F.
Grease and flour an 8″x8″ or 9″x9″ cake pan.
Beat eggs until frothy with the salt. Gradually add the sugar and beat until light and at least doubled in volume, probably 10 minutes at medium-high speed.
Sift together flour and baking powder. Gently fold flour mixture, followed by water and vanilla extract, into egg mixture until no streaks of flour remain. Pour into prepared pan.
Bake for 20-25 minutes, until cake springs back when touched.
Allow to cool for 10-15 minutes in the pan before turning it out to cool completely on a wire rack.

Cut sponge cake into 16 squares, removing outer edges/crust, if desired.
Combine all ingredients, except coconut, in a bowl and mix until smooth with a fork. Add a bit more milk if mixture is too thick. Dip squares in icing to coat. Let excess drip off, roll in coconut and set on a sheet of wax paper. Icing will be hard in 1-2 hours, depending on your climate.
Lamingtons will keep for a week at room temperature.