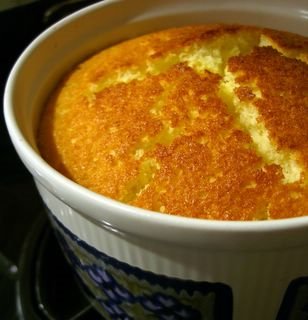 I really like pudding cakes. The combination of the light, moist cake layer with the bubbling sauce underneath is just delightful. I like the fact that you never need an extra topping or garnish with a serving of pudding cake (though whipped cream would work, if you like), either. I also like the fact that this dessert dessert is relatively low in fat. Using whole milk will make it richer, but it’s not necessary.

Pudding cakes only take about 5 minutes to put together and can be served almost straight from the over. Personally, I donâ€™t mind waiting about 10 or 15 minutes, since I donâ€™t like to burn my tongue, but itâ€™s entirely up to you.

Orange is a nice change from the more typical lemon and chocolate pudding cakes because itâ€™s a little bit different. The vanilla flavor comes through a bit more strongly and the whole thing is light and sweet. There is less of a tang than in the lemon pudding and less dense richness than in the chocolate pudding. I also like variations on a theme, since this is essentially the same recipe as the lemon pudding cake. It means that I have more dessert options without having to deal with a whole new recipe.

Preheat oven to 350F.
Place a 9-inch cake pan, filled with about 3/4 inch of water, into the oven. Grease a 1 quart (4 cup) souffle dish and set aside.
In a large bowl, whisk together sugar, flour and salt. Add in egg yolks, orange juice, orange zest, milk and vanilla, and whisk thoroughly.
In a medium bowl, beat egg whites to soft peaks. Stir or fold egg whites gently into lemon mixture, until well combined. Pour mixture into prepared souffle dish and gently place in water bath.
Bake for 45-50 minutes, until the cake has risen and begun to pull away from the sides of the dish. Serve warm.
Serves 4.