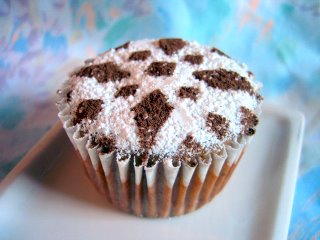 I usually have a small jar of pumpkin pie spice sitting around. It’s easy to make, but in the morning it is very convenient to have some ready to go when I want to spice up my oatmeal on a chilly morning. A few weeks ago, I picked up a jar at Trader Joe’s and was very surprised to discover that it tasted nothing like the classic pumpkin pie spice mix that I know and love. I also discovered that it’s not necessarily the greatest thing to blindside your tastebuds shortly after waking up. Their version of pumpkin pie spice included lots of cardamom, ginger, cloves, pepper and cinnamon. Call me traditional, but that’s not what I want my pumpkin pie spice to taste like.

The point of this little story is that when I was deciding what recipe I wanted to try from Vegan Cupcakes Take Over the World, I realized that the spice combination in the Chai Latte Cupcakes was very similar to my non-pumpkin pie spice mix. I made the cakes and used it instead of the original recipe’s combination with great results. The flavor was very spicy and chai-like, but not too aggressive.
The only complaint that I have is that I don’t think these are actually cupcakes. They have a less refined, more muffin-like texture than I want for a cake. I would have added more sugar if I wanted to try for more cakiness from this recipe. Fortunately, the muffins went beautifully with a cup or tea or coffee and, as they weren’t frosted with anything more than a bit of spiced up confectioners’ sugar, I didn’t feel the least bit guilty about having them for breakfast instead of dessert. And this time I wasn’t surprised by the spicing – just pleased by it.
By the way, these turned out just fine with regular yogurt instead of the soy, so don’t worry if you need to make a small substitution to make the recipe fit the ingredients that you keep at home.

Chai Latte Muffins
(from Vegan Cupcakes Take Over the World

Prehat oven to 375F and line a muffin tin with paper liners.
Heat milk to almost boiling (in the microwave or a small sauce pan) and steep the tea bags for about 10 minutes, making very strong, milky tea. Don’t worry about making the tea bitter (which can happen as a result of oversteeping) because you won’t taste it in the end product.
In a large bowl wisk together oil, yogurt, sugar and vanilla.
In a small bowl, whisk together the flour, baking powder, baking soda, salt and spices. Pour half into the yogurt mixture, stirring well, followed by the tea mixture and the rest of the flour. Stir only until just combined, then evenly distribute into prepared muffin tin.
Bake for about 21-23 minutes, until a toothpick inserted into the center comes out clean and the muffin springs back when lightly pressed.
Cool completely on a wire rack.
Makes 12 mufins.

Top with sifted confectioners’ sugar when cooled. Mix 2 tbsp cocoa powder with 1 tsp cinnamon and 1/4 tsp ground nutmeg together in a small bowl. Sift lightly over top of the sugar (using a stencil for accuracy, if you want) to add a bit of extra spice.