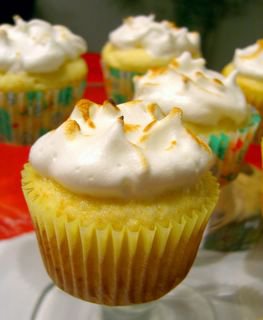 I love these cupcakes. I loved mixing them, filling them and making the meringues. Most of all, I loved eating them.
Did I mention that they are simple to put together and very impressive looking? I was inspired by a recipe from Food&Drink, the official magazine of the liquor licensing board of Ontario, Canada. I didn’t quite use their recipe, but the premise is the same. The magazine is a beautiful publication that I have used before with great success. Incidentally, they recommend a Riesling or a Chardonnay as an accompaniment for these cupcakes.

The cake is moist and tender with a light lemon flavor from zest that is stirred into the batter. It is possible that lemon juice would have added to the intensity, but I don’t think that it would have been necessary since the cupcakes were filled with lemon curd. In fact, as you eat the cake, you will come across a bright burst of tart-sweet lemon in the center; more lemon flavor isn’t even necessary. The meringue makes a nice change from more traditional buttery frostings, too. It is light enough not to take away from the flavor of the cake, but it adds a bit of extra sweetness and a delightful look. And it also gave me an excuse to use my kitchen torch to brown the peaks.

I used a cooked meringue for these, so they would stay stable at room temperature for several hours, though they can be finished and refrigerated for 24 hours. If you don’t have a small kitchen torch, just place the cupcakes on a baking sheet, top with meringue and put them under the broiler for about 3 minutes, until lightly browned.

Preheat oven to 375F. Line 18 muffin cups with paper liners.
Sift together cake flour, ap flour, baking powder and salt in a medium bowl.
In a large bowl, cream butter, sugar and lemon zest until fluffy, about 3 minutes. Beat in egg thoroughly, followed by vanilla. Alternate milk and flour in three additions, ending with flour.
Evenly distribute in prepared pans.
Bake at 375F for 18-20 minutes, until a tester comes out clean and the cake springs back when lightly pressed.
Remove to a wire rack to cool.
Makes 18 cupcakes.

Once the cupcakes are cool, fill a metal-tipped pastry bag with lemon curd (recipe follows, or you may use store-bought) and pipe into cupcakes. Poke the tip of the pasty bag 1/2-1 inch into the top of each cupcake and squeeze about 2 tsp lemon curd into it. You might not use all the curd.

Set a glass or metal bowl over a sauce pan with an inch or two of boiling water in it (i.e. use a double boiler) and beat egg whites in it until foamy. Add in cream of tartar and beat until fluffy but not yet at soft peaks. Stream in sugar until meringue reaches fairly stiff peaks. Spread on cupcakes with a small knife or offset spatula.

Brown with a blowtorch or place on a baking sheet under the broiler until lightly browned, about 3 minutes.

In a small sauce pan, over medium heat, dissolve sugar into lemon juice. Add zest.
Lightly beat egg in a small/medium bowl. Whisking constantly, slowly pour lemon/sugar syrup into the egg. Beat for 2 minutes (only 1 if you’re using a mixer), then transfer back into the saucepan.
Heat over low heat, stirring constantly, until it just starts to bubble at the edges. Remove from heat and stir in vanilla.
Transfer to a small container and store in the fridge.
Makes 2/3 cup.

—-
On an un-cupcake related note, bakingsheet is a finalist in the Best Cooking/Recipe Blog category of the Best of Blog Awards. I’m honored to have been nominated, and congrats to the rest of the nominees. I’ll announce when the polls are open for voting!