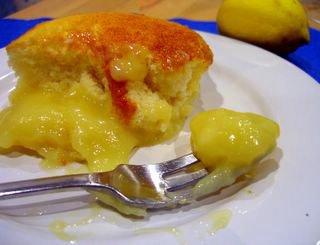 After the last IMBB, Sarah Lou from One Whole Clove and I had a bit of a chat about the effect of water baths on souffles. Her lovely Pecorino and Caramelised Veggie Souffle, baked in a water bath, just didn’t rise quite as impressively as she had expected (though it certainly still looked good). Since a souffle gains much of its lift during its initial moments in the oven, it seemed that the water bath, which prevents sudden or extreme temperature changes, might be to blame. My suspicions were confirmed with this recipe for Lemon Pudding Cake from All American Desserts .

I’ve made pudding cake before, chocolate pudding cake, but this pudding cake is a bit different. Unlike its predecessor, this cake is built almost like a souffle: the whites are beaten separately from the rest of the ingredients, and then everything is baked in a water bath. The dessert separates, during baking, into a thick, soft sponge cake layer and a smooth, creamy custard. The water bath insulates the thick, curd-like pudding layer and prevents it from over-cooking, while the sponge rises high above.

The dessert is remarkably unfussy, so if you have two lemons in your kitchen, you’re all set. This recipe really has only five ingredients, though I added vanilla to the original, and is just the right size for three or four people. Since the lemon mixture is so thin, there is no need to fold the egg whites in to it; you can just gently stir the mixtures together. During baking, the top of the cake will turn a light brown as it finishes. Unlike a souffle, this dessert will not fall due to the structure of the cake layer. I ate this after letting it cool for only a few minutes and there were no leftovers, so I can’t attest to its keeping powers, but it tastes so lovely that I suspect you will not have problems keeping it either. The vanilla came through the lemon a bit and I felt like I was eating a very light cake drizzled with lemon curd. Which, essentially, I was.

(from All American Desserts)
2 eggs, separated

Preheat oven to 350F. Place a 9-inch cake pan, filled with about 3/4 inch of water, into the oven. Grease a 1 quart (4 cup) souffle dish.
In a large bowl, whisk together sugar, flour and salt. Add in egg yolks, lemon juice, lemon zest, milk and vanilla and whisk thoroughly. In a medium bowl, beat egg whites to soft peaks. Stir egg whites gently into lemon mixture, until well combined.
Pour mixture into prepared souffle dish and gently place in water bath.
Bake for 45-50 minutes, until the cake has risen and begun to pull away from the sides of the dish.
Serve warm.
Serves 4.