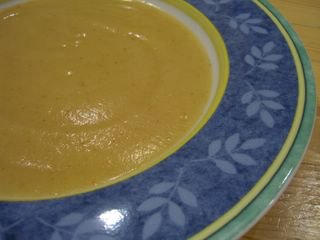 Roasting cauliflower is my favorite way to prepare it. It always seems incredible to me that such a boring vegetable can turn into something spectacular after a short time in the oven. Roasted cauliflower can convert even the staunchest non-cauliflower eater (like younger brothers). As much as I love it, though, even I need a change from time to time. Soup was the answer this particular time.

I had always heard that cauliflower could be used as a sort of stand-in for potatoes in soup, adding a creamy consistency and richness without the occasionally starchy heaviness of potatoes. Apparently, this is true, because my soup was creamy and rich, but not very heavy. Roasting the cauliflower, shallots and garlic gave the soup a depth of flavor â€“ sweetness and intensity – that ordinary, stovetop cooking methods could not have provided in such a short time. In addition to enhancing the flavor, I could see little specks of roastiness in the final puree, which added a hint of interest to the appearance of the soup.

I did choose to add one potato to the soup, a Yukon Gold. The Yukon Gold potatoes have a beautiful, slightly gold tint and are creamier than other varieties of potato. As always, I like my soups on the thick side, so I did not thin this with very much milk. If you prefer thinner or more cream-enriched soups, feel free either to add an additional Â½ cup of milk or to substitute the milk with cream. Serve this with bread and a salad for a fantastically comforting winter meal.

salt and pepper to taste

Preheat oven to 375F. Toss cauliflower and shallots in 2-3 teaspoons of olive oil. Wrap the garlic cloves in a small piece of aluminum foil and place on a baking sheet with cauliflower and shallots. Roast at 375 for 45 min to 1 hour, until very tender and browned.
Put cauliflower into a large pot or dutch oven with chicken broth and water. Cut potato into 1-inch chunks and add to broth, along with paprika, salt and pepper. Bring to a boil, then reduce heat and simmer until potato is very tender.
Puree with a stick blender, or in batches in a blender. Add milk/cream, increasing amount to Â¾ cup if you prefer a thinner soup.S
erves 4 with leftovers, or 8 as a first course.