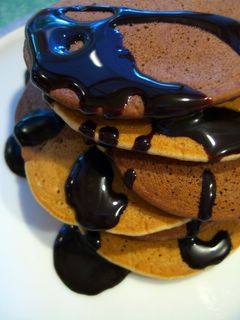 The pancakes themselves are not very rich. The base is a very simple pancake batter with a few additions. The cinnamon pancakes have but a bit of spice to them. The chocolate pancakes, by themselves, are not very sweet, which makes them still work well with syrup. If you choose not to use syrup, you may want to increase the sugar by another tablespoon I have included additional options in the recipe below for add-ins to spice up the pancakes. Go with mini chocolate chips for something a bit more decadent, dried cranberries for a bit of tang or add a pinch of cayanne to each batter, eat them together and call them mexican chocolate pancakes. It is probably best to add something to either the chocolate or the cinnamon, but not both, for balance. The butter is optional, as I have made them with and without the butter. The pancakes will be slightly more tender with the butter, but the difference is very small. These pancakes simply fun.

To either batter: 1/4 cup chocolate chips (mini is best), cinnamon chips, dried cranberries or coarsely chopped, toasted walnuts. You can also add 1 tsp vanilla to each batter, a pinch of cayanne or 1 tsp orange zest. Use all at once at your own risk.

Using one bowl for each batter (the method is the same), whisk together flour, baking powder, salt and sugar. Sift in cocoa/stir in cinnamon.
In a separate bowl, whisk together milk, egg and butter (if using). Pour wet ingredients into dry ingredients and stir until well combined, with only a few lumps. Stir in any additions, if using.
Heat a griddle or nonstick pan over medium/high heat. Drop batter to form 3 inch pancakes. Cook for about 2 minutes, until pancake bubbles and looks slightly dry around the edges. Flip and cook until golden brown. If you make the chocolate and cinnamon pancakes at the same time, you will be able to judge the donness of the chocolate by the color of the cinnamon.
Serve immediatey with maple syrup.
Each batch makes about twelve 3-inch pancakes.