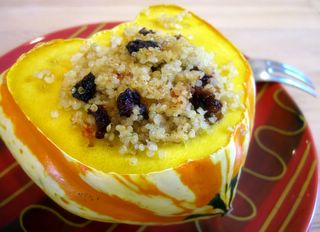 I actually saw a picture of this dish in a magazine ad sometime last year. It was so visually appealing that I remembered it all spring and summer, waiting for all the pumpkins and squash to turn up in fall. Could I have found the squash I wanted earlier in the year? Probably. But I wouldn’t have wanted to for the same reasons I don’t crave a dinner of salad and sorbet out in the yard in winter.

This was an easy, tasty dish. You can serve it as a side for a warm, hearty dinner, with roasted pork or chicken. It could serve as the main dish for somewhat lighter meal, with some warm, fresh bread, and save room for a rich dessert. Use dried cranberries in place of the cherries if you can’t find them and add in a quarter-cup of chopped pecans, if you feel so inclined. I will sometimes drizzle a bit more maple syrup over it before serving, but salt and pepper are nice, too.

Preheat oven to 350F.
Cut squash in half and place face down in a over proof dish. Add a few tablespoons of water to the dish and cover tightly with foil. Bake for 30 minutes.
Meanwhile, combine quinoa and 1/2 cup water in a small sauce pan. Cover and bring to a boil. Reduce heat to a simmer and cook until water is absorbed, about 10-15 minutes. Stir in maple syrup, cinnamon, salt and dried cherries. Set aside until the squash is ready.
Remove squash from the oven and turn cut side up. Divide quinoa mixture evenly between the squash. Cover the squash tightly with foil and return to the oven and bake for 20 more minutes, until squash is quite tender.
Serves 2.