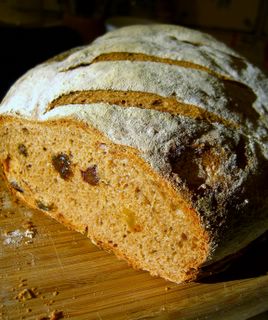 Pumpernickel is one of the more maligned breads. For good reason. It is a naturally leavened, or sourdough, rye bread. Traditionally, pumpernickel bread is made without wheat flour and is baked for 16-24 hours at a low temperature. This produces a dense, dark, coarse and flavorful loaf, though the flavor may not be the most appealing one. This fact is evidenced by its name.

The origin of the word Pumpernickel is sometimes attributed to Napoleon. It is said that he was presented with a loaf of the bread on a campaign in Eastern Europe and refused it, saying “Pain pour Nicole”, meaning that the bread was only fit for a horse, not for human consumption. A cute story, but untrue. The bread originated before Napoleon’s time and, if he had a horse called Nicole, it was not among his well-recorded mounts.

The actual name originated before Napoleon’s time in Old German, from pumpern “to break wind” and Nickel “Demon”. Devil-fart bread. Mmm, appetising. My suspicion is that the bread must have been reputed to have health benefits, because it defies logic that a barely digestible bread that incurred such an unfortunate name would continue to be popular.
Pumpernickel has, fortunately, been modernised. Loaves now feature wheat flour as well as rye and often have yeast, colorings – such as molasses or cocoa – and flavorings like caraway seeds added to them. This produces a softer, more appealing loaf. Pumpernickel is often featured in delis because it is a good sandwich bread. It is most often paired with roast beef and pastrami and it goes very well with cheeses. It also makes up the dark half of a marble rye.

My pumpernickel is chewy, hearty and dense, with a mix of rye, whole wheat and all purpose flours. I do break away – thankfully – from tradition: I used a bit of yeast, some cocoa to add color to my bread and added raisins. Leave out the raisins if you’re not a raisin lover and feel free to add in 1-2 teaspoons of caraway seeds. The buttermilk gives the loaf a tight crumb. This bread makes a great sandwich and goes very well with soups or as part of a cheese tray.

Combine the ap flour, yeast, sourdough starter, water and warm buttermilk in a large bowl. Mix well and leave to proof in a warm place for 1 – 1 1/2 hours.
Stir in cocoa powder, molasses, salt, caraway seeds (if using), rye and whole wheat flours. If the dough has not started to come away from the sides of the bowl yet, add a few tablespoons of all purpose flour.
Turn dough out onto a lightly floured surface and knead in raisins (if using). Knead for about 5 minutes, until dough is very smooth. It will not be as elastic as all wheat flour doughs. Place dough into a lightly oiled bowl, cover with plastic wrap and leave to rise for about 2 – 2 1/2 hours, until doubled.
Gently, without deflating the dough too much, shape into an oval roughly twice as long as it is wide and place on a lightly floured baking sheet. Rub loaf gently with some all purpose four. Cover with a dish towel and let rise for 30-45 minutes.
Preheat the oven to 425F. Make several shallow slashes in the top of the loaf.
Bake for 40 minutes at 425F.
Remove to a wire rack to cool completely before slicing.
Makes 1 loaf.