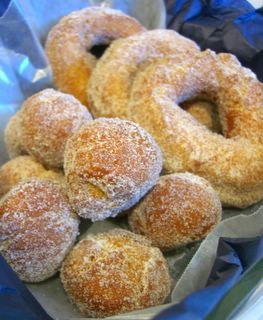 There is nothing wrong with spelling the word for these fried rings of dough as “doughnuts” or “donuts”. They are both correct. Just ask spell check. I personally use the “donut” spelling, as it is faster and simply more economical as far as I am concerned. There is nothing wrong with spelling or dialect variations, particularly when involving pastry.
This week, as you may have guessed, I made donuts.

Fried dough is a bit tricky. Most fried bread products are rather small: dumplings, beignets, klejner, etc. They are small because the outside browns very quickly and large pieces of dough will not be cooked all the way through. In fact, one of the tales about the origin of the donut states that the center was poked out because it was always soggy. Where the “nut” came from, I simply do not know.

Homemade donuts are something that I never really thought that I would make. I know a good place in my neighborhood to get them, but to be honest, I rarely do. Health concerns, you know. But when I was little, I loved to get a sugar coated, fluffy yeasted donut whenever possible. I hated the glazed ones. One day, my donut was not cooked through as well as it should have been (perhaps the origin myth is true!) and I became rather ill. Same thing the next time. That was the end of those donuts.

My favorite donuts are plain cake donuts and cake donuts with rainbow sprinkles. The sprinkles make me feel like a kid, which I love. Cake donuts are not yeast-raised, but are put together much like a quick bread and leavened with chemical leaveners. The batter is a snap to put together, you chill it for at least 3 hours to make cutting it easier and then you fry it. Which means that you can prepare it the night before and have fresh donuts in the morning. I opted for a pumpkin donut recipe from Epicurious – what better way to celebrate fall? The dough has little fat in it, but the frying compensates. The pumpkin flavor was subtle, but there and they tasted very good plain. The crumb was moist but not dense and they weren’t as greasy as I expected them to be at all. I tried them with a maple flavored glaze, but the glaze overpowered the pumpkin flavor. I switched to a spiced sugar mixture, using the same spices as the pumpkin dough. Once the donuts were rolled in the spiced sugar mixture, they were outstanding. Why haven’t I seen these down at the donut shop?

Whisk together flour, baking powder, baking soda, salt and spices in a medium bowl.
In a large bowl, cream together butter and sugar. Beat in eggs one at a time. Add in vanilla, buttermilk and pumpkin. Gently stir in flour mixture until fully incorporated. Cover bowl is plastic wrap and refrigerate at leat 3 hours.Sprinkle two baking sheets with flour. Working with 1/3 of the dough at a time, press the chilled dough out, on a lightly floured surface, to about 1/2-2/3 inch (2 cm) thickness. Using a 2 1/2 inch diameter round biscuit cutter, cut out rounds and place on a baking sheet. Use a 1 inch cutter to remove the center of the round, and set the dount hole on the baking sheet as well. Repeat until all the dough is used. You may reroll the scraps. You should end up with 24 donuts and 24 holes.

In a large sauce pan, heat 2-3 inches of oil to 365F/185C. Make a thick stack of paper towels to drain the donuts on. Working one or two at a time, fry the donuts until golden brown, about 1 minute per side. You may fry the donut holes in groups of 4 or 5. Check the temperature to make sure it remains constant. Remove dough to drain and cool thoroughly on paper towels.

In bowl, whisk together sugar and spices. Coat donuts and donut holes in sugar mixture. The sugar will stick to the residual oil (though no one likes to think about that). Enjoy!
Makes 24 donuts and 24 donut holes, but can be halved.