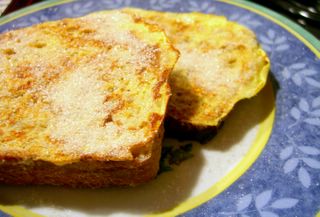 French toast was definitely my most looked forward to breakfast growing up. I liked to sleep late, though, so my slices were always cold by the time I got down to breakfast. Not that it mattered to me, though. I would just pop them in the microwave. I always sprinkled them with lots of sugar instead of using syrup. I suppose it makes them a little creme brulee like, in that it adds a nice crunch to a somewhat custardy dish.

There are two pitfalls in making french toast. The first is slicing your bread too thick and not letting the bread soak in the custard long enough. Having tough, dry bread in the middle of french toast if awful. The second pitfall is having overly muchy french toast. This problem usually arises from having too much milk or cream in proportion to the eggs in your recipe. When the bread soaks up so much milk, it just falls apart, rather than becoming custardy.

You can easily use milk, cream or any combination of the two as the liquid in this recipe. Light cream or half & half gives it a bit of richness without going overboard. Cinnamon is always a great addition, but spices like nutmeg and cloves also go very well. If my bread were strongly flavored, I might pass on the cinnamon all together, but if it is a rather plain bread, I might use a few spices instead of just one. You can also use oil to grease your pan, but the combination of cream, butter and eggs is just too good to pass up sometimes.

8 slices of bread
butter, for greasing the pan

Whisk all ingredients together in a large bowl and pour into a shallow pan or baking dish. Lay slices of bread in the mixture and soak them, remembering to flip them over, for a few minutes until saturated but not mushy.
Heat a frying pan over medium-high heat. Coat with butter and place slices of french toast into the pan. Cook until the bottom is browned and the egg mixture around the edge of the toast is firm, about 2 minutes. Flip over and repeat.
Serve warm, with lots of syrup.