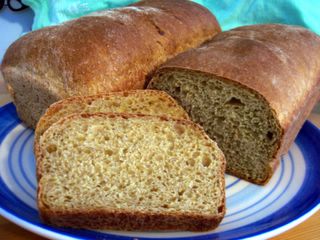 Ah, a slice of Americana, er, Anadama.
Anadama (pronounced an-uh-DAM-uh) bread traces its roots back to colonial New England, the northeastern part of the US. It is characterised by its inclusion of cornmeal and molasses, which are two very American ingredients.

The origin of the name is lost to history, but there are several stories that attempt to explain it. The upshot of every story is that a woman named Anna baked the bread and someone, possibly her husband, said “Anna, damn her!” either because the bread was awful or the bread was wonderful.

I tend to agree with the latter. I like this bread quite a bit. I threw in a cup of mashed banana (2 medium) both because I like the flavor combination and because of the added hilarity of the new name: Banana-anadama.

When I tasted the dough, it had a very strong molasses taste and was quite salty. I was honestly a bit worried that the resultant bread wouldn’t be as appetising as I had hoped. I need not have worried, though. The flavors both mellowed and melded as the dough rose and the finished loaf had a faintly sweet, wheaty taste with a light banana flavor. It had a fairly coarse but even crumb and was neither too dry not overly moist. With it’s hearty taste and light feel, it was perfect for accompanying dinner as part of a bread basket. It also made tasty sandwich bread and french toast.

Combine yeast and warm water and leave to proof for 5 minutes, until bubbly. Stir in cornmeal, molasses, cinamon, salt, banana, egg and 1 cup of flour until smooth. Add in the rest of the flour gradually, until the dough comes away from the sides of the mixing bowl in a ball.
Remove dough to a floured surface and knead, adding additional flour if necessary, until smooth. Place dough into a large, oiled bowl and leave to rise until doubled in size, 1 – 1 1/2 hours.
Grease two 8×4 inch loaf pans. Divide risen dough into two pieces. Flatten each piece into a 10×8 rectangle and roll up (beginning with the longer side) as you would a jelly roll. Tuck in the ends and place into one of the prepared loaf pans. Repeat with second piece of dough.
Let the loaves rise until nearly doubled, about 1 hour.
Meanwhile, preheat the oven to 375F.
Bake loaves for 30-35 minutes, until nicely browned on top and they sound holly when the bottom is tapped.
Allow to cool on a wire rack before slicing.