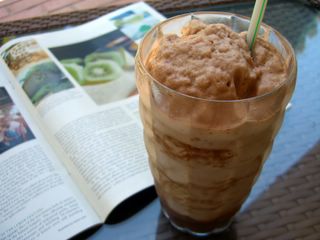 A lovely independent coffee shop a few neighborhoods away is one of my favorite places to visit. It is near Warner Bro.’s studios and attracts a lot of “industry types”. If you’re not familiar with that term, it basically means that there are lots of actors, executives and, above all, screenwriters at this place. I should say that many are actually aspiring screenwriters, as they are not paid for their work (yet). The coffee shopt has a great location, good food and excellent drinks, but I love being able to casually evesdrop on random plot developments or scripts-in-progress while I sip my coffee.

I don’t get over there as much as I’d like, so I thought I would try to recreate one of my favorite summer drinks at home. Yes, it’s actually called a Mochaccino and it comes hot, over ice or blended with ice. The menu board lists its components as: coffee, espresso, cocoa and cinnamon. This was my starting point.

It seemed likely that the greatest amount of coffee was present in the drink and the least amount of cinnamon. It tastes mostly of coffee, with a hint of spice, so I tried not to make the cocoa or cinnamon too agressive. Though the drink is not too sweet, it tastes creamy; it uses sugar to create the texture and not milk.

While I cannot say that this is exactly the same, it’s pretty darn good. It is more refreshing than many blended coffee drinks because it doesn’t have the heaviness of dairy to weigh it down into dessert territory. And, it’s a great thing to do with leftover coffee.

Fill up one large cup (16 oz.) with ice and pour strong, cool coffee (add a shot of espresso if you have it) over ice to the top of the cup. Pour this into a blender. Add 1/2 tsp vanilla extract, 1 tsp cocoa powder, 1/4 tsp cinnamon and 2 tbsp sugar. Blend until smooth. Whipped cream topping optional.
Makes 2 servings.