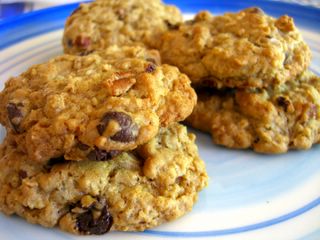 I just love it when a dessert or snack has a nutritional benefit that doesn’t make me feel guilty about taking seconds. This pie is a good example, but I will always have a soft spot for cookies. These cookies in particular have a rather heart heathy flair to them: most of the fat in from tahini instead of butter. The recipe is from EatingWell magazine.

Out of the oven, they were crisp on the edges and soft in the center. The flavor was very nice. I found the cookies to have a nutty undertone, both from the whole wheat flour and the tahini. I’m sure that if you didn’t know there was tahini in the cookies, it would be difficult to determine the source of the nuttiness. I sent these out with success to some people as part of Blogging By Mail, so they do ship well. The added benefit was that I was able to get additional feedback, because Jessica noted that these weren’t particularly buttery in flavor. Not suprising, considering that there is not much butter in them!

I left out the walnuts in case of allergies, but there is no doubt that they would be tasty with them. This omission would also lower the fat slightly from the nutritional information given by the article. Of course, there are still the chocolate chips to contend with, but that is one sacrifice I’m not willing to make in the search for healthy treats.

Preheat oven to 350F and line baking sheets with parchment paper.
Whisk together oats, flours, baking soda, salt and cinnamon in a medium bowl.
Beat tahini and butter together until blended. Add sugars and beat until well combined. Add in egg, egg white and vanilla until thoroughly combined. Stir in oat mixture until nearly incorporated, then add in chocolate chips. Do not over mix.
Drop dough by tablespoonfuls onto prepared baking sheet.
Bake for 10-12 minutes (or 15 minutes for a crispy cookie), until golden brown at the edges.
Remore to a wire rack to cool completely.
Makes 4 dozen.