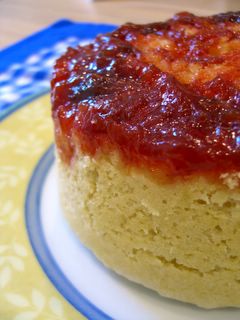 I have never steamed a pudding. And by pudding, I mean cake. Steaming cakes, or puddings, is a traditionally British way of cooking these, instead of baking them.

I picked a recipe from Jamie Oliver’s The Naked Chef for a basic steamed pudding. The recipe seemed simple enough and I liked the fact that he suggested simple sounding flavor variations in addition to offering a basic pudding. Unfortunately, there were several things that I didn’t like about the recipe. I didn’t know if there was any way to test when the pudding was done and the cooking time of “about 2 hours” seemed rather vague. Jamie also did not offer any serving suggestions, so I wasn’t sure whether the pudding should be served immediately or if it could.should be held at room temperature.

Mixing and cooking the puddings was simple. I didn’t have pudding molds, so I used pyrex baking dishes covered tightly with aluminum foil, per Jamie’s suggestion. Jamie did not mention that the puddings would make such a racket as they steamed. It could be the fact that I did not have actual molds, but my dishes rattled around like crazy and resisted all attempts to weight them down.

I made two puddings: a jam pudding and a chocolate pudding. The jam pudding tasted excellent. I used Sarabeth’s Plum Cherry Preserves and spiked the batter with a bit of vanilla and almond extracts. It was underbaked in the center, after about an hour or so of cooking time. I had to take it off the stove because I couldn’t stand the noise. The chocolate pudding was much quieter and seemed to be done after 1h 45min. It was much drier than the jam pudding and sauce that I poursed over it did not seem to help its case. The fact that there were no additional flavorings beyond the cocoa made it rather bland.

All in all, I will give steamed puddings a try again in the future. I think that they can add a lot of moisture to a cake without letting it get gummy. I’m sure that it is an excellent method for puddings with dried fruit, as they will plump nicely in the heat. I really did enjoy the jam pudding (the cooked parts, at least), so below is my adaptation of Jamie’s recipe. I tried to fill in Mr. Oliver’s instructional gaps, too.

Set a large pot on the stove and grease a 1 quart (4 cup) baking dish or bowl, making sure it will fit in your pot when the lid is on. Spoon jam into the bottom of the dish.
In a medium bowl, whisk together flour, baking powder, salt and sugar. Stir in softened butter so it is evenly distributed. Stir in egg, milk and extracts to make a smooth batter. Pour batter into baking dish and cover it tightly with aluminum foil.
Place dish into pot and fill with water until it reaches half way up the side of the dish. Place lid on the pot – you may need to check the water level occasionally if the lid does not fit tightly. Bring water to a boil, then turn it down to a simmer and cook for approx 1 h 45 min. Poke the top of the cake by pressing lightly on the foil to check for doneness; the cake will spring back when it is ready.
Carefully remove dish from pan and turn the pudding out onto a serving dish.
Eat warm, with tea.