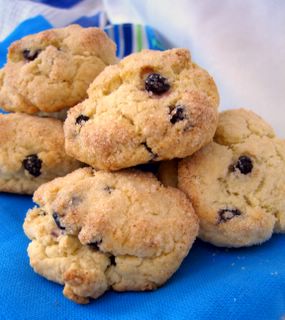 I had always assumed that when JK Rowling refered to “rock cakes” in her Harry Potter books, she was using an alternate term for scones. I found this to be rather unusual, but not entirely unlikely, so I was satisfied with my explanation. For a while.

I stumbled across a recipe for rock cakes at the Floo-Network and I knew I had to try them. I couldn’t let myself go on believeing that they were scones! Baking and eating were done purely for scientific reasons, you know.

Rock cakes are actually not scones. In fact, they are a bit cookie-like because, though you do cut the butter into the flour, they use minimal additional liquid. Rock cakes are small, round cakes that have a crunchy, sugar coated exterior and the most wonderful, buttery, melt-in-your-mouth texture you could ever hope to enjoy. If you over cook them, they will turn out rather burnt and rock like since there is little moisture in the dough.

It was easy to cut the butter into the flour and stir in the rest of the ingredients. I don’t really have access to mixed peel, so I omitted that. I decided to use currants rather than raisins, though you could certainly add any type of dried fruit you wish. This is not a recipe where you should worry too much about over mixing; it takes a while for the dough to come together because there is so little liquid. The presence of such a high fat-to-flour ratio will keep the dough from getting tough as you bring it together. They’ll dry out if they bake for too long – probably why Hagrid‘s are inedible – so keep an eye on them and take them out when the tops are a light golden brown.

Even if you’re not a Harry Potter fan, you should definately try these cakes.

Preheat oven to 400F. Line a large baking sheet with parchment paper.
Whisk the flour, baking soda and salt together in a large bowl and rub in the butter lightly with the fingers until the mix looks like breadcrumbs. Stir in the sugar and currants.
Beat the egg together lightly with the milk and vanilla. Pour it into the flour mixture and stir until the dough comes together into a ball.
Shape dough into 2 inch balls, dip the tops in coarse sugar and place on baking sheet. They won’t spread very much, so they can be fairly close together.
Bake for about 13-16 minutes, until tops of cakes are light gold.
Remove to a wire rack to cool, or eat them straight away.