It was pointed out in this article, that when Cooks Illustrated standards diverge from your own, you can end up being a bit disappointed with their recipes. I have found this to be a true assessment on several occasions, though the recipes themselves are excellent. There are some types of food where the likelihood of this happening is very low. Cakes are a good example as I have yet to meet someone who wants a dry, non-tender cake. Flavors can easily be altered, but the foundation of the cake is very important and I have found The Best Recipe to be a great resource.

This angel food cake recipe is a great example of a “best recipe”. It is moist, tender, not overly sweet and ethereally light. I could have eaten the entire thing in one sitting – which was a shock and all the store bought angelfood cakes I’ve had taste like sweet styrofoam and even ones I have made before have not turned out this well, though I do like the individual spiced angel food.

I slightly differed from the recipe by using superfine sugar, also known as castor sugar, instead of granulated because I fine it produces smoother meringues. I also did not use lemon juice/extract in the cake. I used vanilla paste – you can spot the beans in the photo if you look very closely – and almond extract to flavor the cake and served it with orange and lemon curds. Lemon curd is always a nice, tart contrast with angel food cake. The orange curd was made by substituting orange for lemon in the same recipe. It tasted marvelously sweet and smooth, rather like a creamsicle. It paired with this angel food even better than the lemon curd did.

I like to make it the night before and take it out of the pan the next day, so this can be prepared a day in advance. Use a serrated knife to slice it. This cake will be making appearances at my table more than once this summer. I’m already thinking about pairing it with balsamic strawberries.

adapted slightly from The Best Recipe

In a small bowl, whisk together 3/4 cup sugar and the cake flour. Set aside.

Beat egg whites until frothy, the add cream of tartar and salt. Beat until fully incorporated then begin to add the remaining 3/4 cup of sugar 1-2 tablespoons at a time. When sugar has been added, beat egg whites to soft peaks. You will know when you have soft peaks because the egg whites will look like soft waves and when you lift the beaters, the peaks will droop back down into the batter. If your batter is falling in ribbons, it is not quite down. Don’t be afraid to slow down the mixer and check a few times as you get close. Do not beat all the way to stiff peaks. Once you have soft peaks, add the vanilla and almond extracts and beat for a few seconds to evenly distribute.

Sift the flour/sugar mixture over the egg whites in 6-8 additions (depending on your proficiency with folding flour into egg whites) and gently fold it in after each addition. It is better to take your time and do it gently than to rush and deflate the egg whites.

Spoon batter into an ungreased 9 inch tube pan with a removeable bottom. Smooth the top with a spatula and tap the pan on the counter once or twice to ensure that there are no large bubbles lurking beneath the surface.

Bake for 50-60 minutes, until the top springs back when lightly pressed. Mine took 55 minutes.

Remove from oven an invert pan over a bottle. Allow to cool completely or overnight.

Gently run a thin knife around the sides, then around the bottom, of the pan to release the cake when you are ready to serve it. 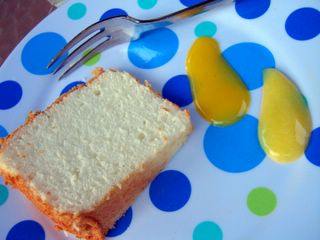