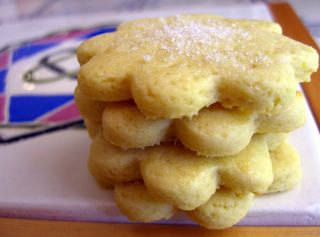 I was flipping an old Joy of Cooking (1946 edition – and note that they don’t appear in more current additions) when I spotted Hard Cooked Egg Cookies. My first thought was that they were cookies that would have a dollop of curd or something in the center to resemble hard boiled eggs. They actually involve putting hard boiled eggs through a ricer and into the cookie dough itself! It sounded so interesting, that I had to give the recipe a try

I cheated and made the whole dough in the food processor, so I didn’t have to rice the eggs in advance. The recipe’s baking instructions were also limited to “Cook in a slow oven,” so I had to experiment a little bit with oven times and temperatures. The recipe called for dipping the unbaked cookies in egg whites and rolling them in sugar, and because there was no leavening in the cookies, I decided that perhaps they should be rolled and cut out like shortbread. I dipped a few teaspoon sized balls in the egg white, rolled them in sugar and baked them before rolling out the rest of the dough to compromise. They were ugly, but I think they had a slightly better crunch to the outside than the rolled cookies. The cutout cookies, which are pictureed above, by the way, were brushed with egg white and sprinkled with coarse sugar. I underbaked the cookies slightly, so they didn’t keep well; they were rather mushy the next day. But I got a request for another batch (baked longer this time!), so it definitely wasn’t all bad.

There was no way that you could guess that there were hard boiled eggs in these cookies. The cookies had a nice, light lemon flavor – which I would slightly increase next time – and a moist, melt-in-your-mouth texture. Here is the recipe, complete with how I would do it again: increase the lemon, increase the baking time, keep the rolling, but dip the but cookies into the egg white before dredging in sugar.

Cream together lemon zest, lemon extract, sugar, salt and butter in a food processor. Add in hard boiled eggs and process until fully incorporated. Mix in egg. Add flour and pulse until dough just comes together.

At this point you can chill the dough for a bit if your kitchen is very hot, otherwise roll out the dough on a lightly floured surface until it is 1/4 inch thick and cut into rounds with a 2 inch cookie or biscuit cutter. Dip the cut cookies into the egg white then dredge in the sugar. Arrange on baking sheet – cookies will not spread – and bake until just beginning to brown at the edges, about 12 minutes.

Remove to a wire rack to cool.