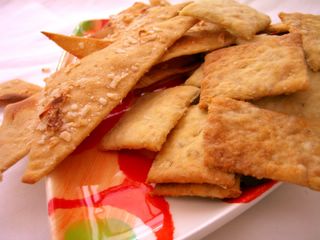 I have made crackers before, both savory and sweet. While the results were good in my first savory attempt, I have to admit that I wasn’t all that sure of myself because I didn’t think the original recipe was very good. Before my course officially ended, our instructor gave up a copy of a cracker recipe and mentioned that it was worth making our own. Her recipe turns out to be very similar to one in Baking with Julia, so I’ve chosen to make Savory Wheat Crackers (on the left in the photo).

On the facing page (shown in right of photo) is a recipe for Swedish Oatmeal Hardtack. I tried to make hardtack once, long ago, when I was under the understanding that it was simply flour and water mixed together and baked until it was hard. Hardtack definately carries the connotation of something unpalatable with such a long shelflife that it was a staple on long voyages and in the army in, and possibly before, the 18th century. Swedish hardtack is not the same type of cracker. It is much richer, using butter, shortening, oatmeal and buttermilk and can be eaten for breakfast as well as with dips.

The wheat crackers were very simple to make. Mix flour, salt and water in a food processor, rest it, roll it out and bake it for a brief period at a high temperature. You can top them with anything sweet or savory. I used garlic and salt on some and coconut and sugar, as per a suggestion in the recipe. Unfortunately, most of them did not get very crispy! The flavor was bland and the slight chew that remained was unplesant. The baking time was way off base – I had to bake mine more than twice the recommended time and they still weren’t crisp. The recipe stated to roll out the crackers as thin as possible, but if it was supposed to be thinner than I was able to get them, they must have had someone incredibly strong roll out the dough.

The hardtack, on the other hand, was excellent. It was easy to mix and the dough was easy to roll out with lots of flour. The dough was also very forgiving, so you can patch any tears or move bits of it around to make a perfect rectangle, at will. I have to say that the baking time was, once again, way off base. This would not stop me from making these again, though.
Here’s my revised version of the recipe. These have a great inherent balance of sweet and savory. You might like them sprinkled with a bit of salt before baking, if you have a “salt tooth”, like me.

Combine flour, oats, salt and baking soda in a medium bowl and whisk to mix. Stir together shortening, butter and sugar (the recipe suggests using a spatula for all the mixing). Add dry ingredients and buttermilk to the butter mixture. Chill, covered, for 30 minutes.

Using lots of flour on a sheet of parchment paper, roll out 1/3 of dough at a time until it is as thin as you can get it (1 mm or less). Transfer paper to baking sheet. Score dough with a fork and use a bench scraper or a knife to divide the dough into rectangles (I like mine to be on the small side – 1 x 1.5 inches). Bake until the tops of the crackers are golden, 12-15 minutes. If you take them out too soon, they will not be crispy so you may want to bake them longer.

Feel free to bake a small test batch first to see how long they will take to bake, as it will vary with the thickness of your dough.

Transfer to a wire rack to cool and store in an airtight container.