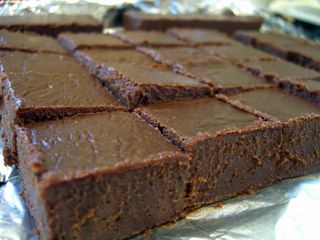 Some men, for reasons I do not fully understand, insist on denouncing chocolate in all its forms. Perhaps they were once told that only women should love chocolate. I’m sure that this myth is founded on the (incorrect) assumption that all women will eat any kind of 5-cents-per-pound “chocolate” sold at the neighborhood drug store in boxes that look as though they’ve been around since the Eisenhower administration. Talk about insulting! Fortunately, even here in the states, general appreciation of quality chocolate is spreading like wildfire. Hopefully we’ll get this myth stamped out in short order. This myth is relevant here because I made this fudge for a friend who has, on occasion, espoused the belief that real men don’t eat chocolate. He does like fudge and brownies, though….

Fudge is a dense, creamy, semi-soft confection that melts in your mouth and is most often chocolate flavored. It has been around since the late 19th century. It’s origins, however, are shrouded in mystery. Some people attribute it to American college women using candy making as an excuse to stay up late. This sounds like a crazy theory to me. Doing homework? Studying? Valid reasons. Making candy? Delicious, sure, but perhaps not the best excuse.

However it came about, it is a popular treat. It can be made in a wide variety of flavors, ships well and tastes great. This fudge recipe must be one of the easiest there is. Based on this recipe, courtesy of Hersheys, I used different chocolate but followed the same procedure. The nice thing here is that you do not need a candy thermometer – just watch the clock when you’re cooking. It is important to stir constantly to prevent scorching your candy. It will start to set when you pour it into your pan, so just tap the bottom and sides a few times to smooth it out instead of trying to use a spatula or a knife to get a level top.

If you’re travelling with these, make sure to layer them with wax or parchment paper or they’ll stick together.

Line a 8×8 inch baking pan with foil or plastic wrap and butter it.
In a medium sauce pan, combine sugar, milk, marshmallow and butter. Bring mixture to a boil, stirring often. Continue to cook over medium heat for 5 minutes, stirring constantly. Use a heat resistant spatula to scrape down the sides of the pan.
Remove from heat and stir in chocolate and vanilla until mixture is smooth. Pour immediately into prepared pan. Let set for 1 hour in the refrigerator before slicing.
Store in an airtight container in the fridge.
Makes 3 dozen squares. 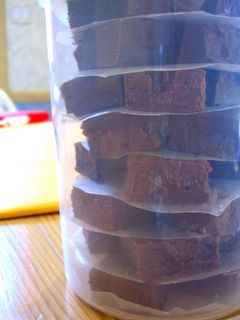 Substitution notes: If you cannot get evaporated milk/unsweetened condensed milk, use half and half or light cream. If you cannot get a jar of marshmallow fluff, use 1- 10 oz bag of marshmallows.
Let me also take this opportunity to note not to use store bought Australian marshmallows as a substitute unless you can get jet puffed ones. I never saw American-style marshmallows when I was in Aus., but the ones I usually snacked on were chewy/crumbly and dry (I liked them, though!) and would not be appropriate for this recipe. It needs to be creamy. I’m sure it would work with homemade marshmallow fluff, though…